Taking Hold Of The Outdoors

If you haven’t heard of Hannah Barron, what rock have you been living under? She’s been setting the outdoor world on fire with her uber-positive Instagram page and YouTube channel. Side of killing deer, turkeys and hogs, what’s this Alabama native do for fun? She lets catfish bite her. Seriously.

It’s an expression that gets thrown around a lot, but Hannah literally grew up in the outdoors. The hunting and fishing roots of her family run deep. Her great-grandmother could light a match with a well-placed shot from a .22 rifle. Her father, Jeff Barron, grew up hard, and hunting was a way of providing food for the family. He would roam the woods daily, and it was common for him to shoot a clutch of squirrels before school. Those squirrels would be the next day’s breakfast.

Being a daddy’s girl, Hannah followed her father into the woods and onto the water. She couldn’t get enough of it. They were the places where Hannah felt most at home. She recalls cleaning deer before she could shoot, and admits she wasn’t in the “popular” crowd in school because she was the “weird” girl who spent too much time in the woods. She didn’t care. She knew who she was and liked it.

Eight years ago, a game warden friend took Hannah and Jeff noodling for the first time, and she was hooked. Today, she spends piles of days each year sticking her hands into catfish beds and letting the fish clamp down her. Injury wise, the 2019 season was her worst to date. A 10-pound flathead rolled hard with her ring-finger in its mouth, which nearly broke the finger. Weeks later, here largest cat to date bit her on the bicep.

“It’s such a rush,” she says. “Your instinct is to pull your hand away, but you have to let them bite. They think you’re a brim or other fish moving in to eat their eggs, so they bite. You may have to get bit multiple times before you can latch on to one. Finding and catching a big catfish is really hard and it takes a lot of time.”

When not letting catfish munch on her limbs, she’s hunting big bucks. For her, few things trump the feeling of hunting a mature whitetail, and in fall of 2019 she harvested her first bull elk. She’s on a roll. Her platform is growing, and all because she has stayed true to herself. That’s the exact message Hannah wants to deliver. 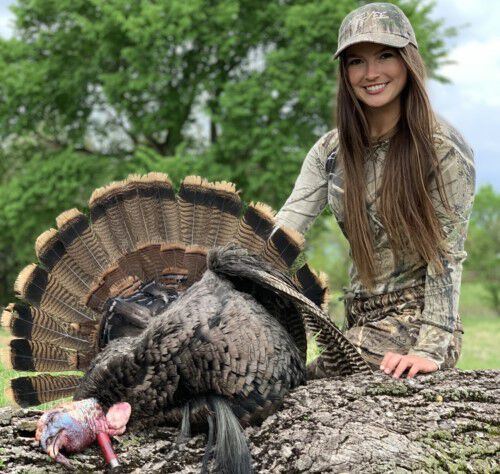 It’s Hannah’s hope her influence in the areas of hunting, shooting, fishing, trapping and fitness will encourage other young women to follow suit and pursue an outdoor lifestyle. With a degree in broadcast journalism and a minor in business from Troy University, she has set the stage well to do exactly that.

“I just want to encourage people to be who they are—to not try and fit into any standard box,” she says. “Girls can get viewed as weird when they are interested in things that fall outside the norm. I want young women to know they can do anything they want and be anything they want. They may have to endure a little extra mess and work a little harder, but it will benefit them in the long run.”

Hannah’s contagious personality and positive attitude caught Federal’s eye and being that Hannah and her father spend so much time in the field, the fit is perfect.

“We shoot a lot,” says Hannah. “Our hog problem in Alabama has gotten terrible. We hunt them year-round to try and keep the population under control, but it’s a constant battle. Then, during the fall and spring, we are always hunting. We shoot lots of ammo, and our goal has always been accuracy and quick, clean kill. Federal makes the best, and that’s why we use it.”