Push Range To The Extreme

Long-range shooting aces Jim and Missy Gilliland have a knack for hitting their mark in hunting and competitive shooting situations. Both are Federal Ammunition brand ambassadors who compete on the Precision Rifle Series (PRS), which routinely challenges participants to hit targets at ranges of 150 to 1,600 yards, often from less-than-ideal shooting positions. While Missy’s forte is competition, Jim is also an acknowledged hunting authority with an uncanny ability to drop game at extreme distances.

If you’d like to shoot better, farther, the following advice from this hard-shooting husband and wife can help make it happen.

Every shooter has his or her personal definition of a long shot. Depending on the firearm, sighting system, ammo and shooter’s expertise, it can range from under 50 yards to more than a mile.

“The long-range hunting world has really exploded in recent years,” Jim adds. “It’s not unheard of for someone to take a 500- to 800-yard shot or longer. However, long-distance hunting shots aren’t the same as target shooting. For me, any shot over 400 yards merits extra care, because there’s a big difference between taking a poke at a piece of steel and making a clean, killing shot on an animal.”

Whether you’re hunting, plinking or competing for a national title, the Gillilands say the following considerations are key to expanding your effective range and enjoying more consistent accuracy.

A form-fitting rifle and scope fuel improved accuracy. The Gillilands advise shooters to set up their rifle with the correct length-of-pull, comb height and overall feel and handling for their personal taste. “If you can’t lay behind your rifle, completely relaxed, and comfortably watch a three-hour movie through your scope, it’s not set up right,” says Jim.

“Fit is critical to accuracy,” adds Missy. “Shooters who struggle to find the right eye relief on every shot never realize their full potential. A comfortable cheek weld allows you to maximize your optics and return to the same spot on the stock every time, which is as important with firearms as an archer having a consistent anchor point.”

Target practice hones shooting skills, but not all types of practice generate equal benefits. “Missing impossible shots and making short-range chip shots won’t make you better,” says Jim. “Instead, challenge yourself to improve by focusing on difficult shots you can achieve. I recommend practicing on the hardest shot you can make at any given moment.”

“Shooting from the positions you expect to encounter in a match or afield is also important,” offers Missy. “Breaking bull’s-eyes from a bench rest is fine for zeroing a rifle, but doesn’t prepare you for making difficult offhand shots when the chips are down.”

“Choosing high-quality ammunition is paramount,” says Missy. “Federal makes a great 6.5mm Creedmoor 130-grain Berger round that I use when teaching classes for other women about long-range shooting.”

“For me, any shot over 400 yards merits extra care, because there's a big difference between taking a poke at a piece of steel and making a clean, killing shot on an animal.”

In competition, she favors a 6mm Creedmoor. “I practice with my .223 trainer rifle, using Federal Premium 73-grain Berger ammunition,” she adds. “My .223 training rifle is built exactly like my 6mm competition rifle. It weighs and feels the same as my competition rifle, so it’s great for practice.”

“Sometimes rifles can be picky with ammo,” Jim notes. “Test a variety of loads to determine which ones your rifle shoots well.

“Also pick the right bullet for what you want to accomplish,” he continues. “The 130-grain Berger is my primary match load. In the field, however, I prefer a bonded hunting bullet like Federal Premium’s Edge TLR, which expands, holds together and provides great penetration at long ranges. Plus, it performs well at shorter distances.”

He recommends using the same ammo you’ll be hunting with when practicing prior to a trip. “I train for the shots I expect to take using the same rifle, scope and ammo I’m bringing with on the hunt,” he says. “Hunters typically have one or two shot opportunities, compared to hundreds or more in a match. You need to be ready. Practicing with the same exact setup helps me capitalize on every chance I get.”

“A good quality scope is a must, especially when you’re aiming at a 10-inch steel target at 800 yards,” says Missy. “You can’t hit what you can’t see.”

Toward that end, the Gillilands recommend choosing a scope with adequate magnification and clear glass that won’t fog up in inclement conditions. “A parallax adjustment is also key to bringing the target into the exact focal plane of the reticle,” Missy notes.

Jim adds that a quality turret system also boosts accuracy, and not just on the range. “I use few holdovers when hunting,” he says. “Relying on turrets I can dial into exact settings based on the same ballistics I use in matches leaves less to chance.”

For hunting situations, both Gillilands also recommend a wider field of view to aid in acquiring targets before they disappear. “Hunters tend to overpower magnification at the expense of field of view,” Jim notes. “I normally shoot 15 to 20 power in competition, but I’m usually down around 4 to 6 power when hunting—and only turn the power up when I have to. I want to be able to shoulder the rifle and aim fast, without struggling to find the target.”

The Gillilands agree that wind can wreak havoc on long shots. “You can know your ballistics and trajectory and be the best shot in the world, but if you don’t compensate for the wind, you’ll regret it—every time,” Jim warns.

“Wind is a huge factor in long-range shooting,” adds Missy. “Learn to read it by watching for signs from the environment, such as the wind’s effect on grass, leaves, dust and the mirage. Good follow-through is also beneficial, because it allows you to see the impact of your bullet and adjust accordingly.”

“A crisp trigger with as light a pull as you’re comfortable with is another key to maximum accuracy,” says Jim. He acknowledges that trigger resistance is a matter of personal taste. “Everyone is different. I prefer 10 ounces for competition and around 1½ pounds for hunting.”

He explains that the heavier pull in hunting situations improves safety. “You’re lining up on a target with the bolt closed and the only thing on is your safety. If you bump the safety off, a heavier trigger pull reduces the chances of accidentally tripping the trigger, which is easy to do when shooting in an awkward position with gloves on.” 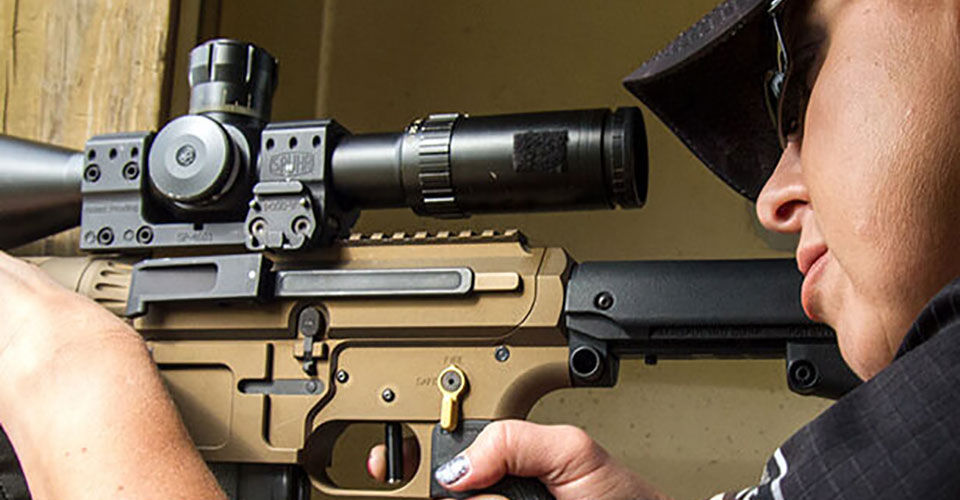 Missy agrees. “Trigger pull is a personal matter,” she says. “Some people don’t like light triggers. When I started shooting competitively, my trigger pull was around 1½ pounds. After tens of thousands of rounds, I’ve gotten comfortable with even lighter pulls. My competition trigger is set at 1 pound, though in hunting situations I still like up to 2 pounds.”

“A large portion of successful shooting is mental, especially in competition,” says Missy. “Having confidence in your equipment and yourself is critical to shooting well. If you question anything about your rifle, ammunition or ability to make the shot, your odds of success drop dramatically.”

“Before you pull the trigger, imagine yourself making the shot,” adds Jim. “You wouldn’t go on a road trip to an unfamiliar destination without first planning your trip, either electronically or on a map. You would mentally go there before you ever got in the car. Likewise, you should mentally go through the process of shooting before you physically do it. Feel the rifle on your cheek, look through the scope, and visualize the round hitting the target exactly where you want it to.”

Bad shots and slumps happen to everyone. The difference between good and great long-range shooters is how they react to them.

The Gillilands don’t dwell on misfires. Instead, they focus on the positive.

“When I have a bad shot or bad stage in a match, I tell myself that’s going to be my lowest score of the day and move on,” says Missy. “When I started shooting, I used to agonize over a bad shot all day. That hurt my performance, so instead I focus on the future instead of the past.”