In today’s world, where hunters and shooters get cutting-edge content straight from the source, Federal ambassador Sportswoman Courtney has made a profession out of her passion for the outdoors. The popular blogger from Raleigh, North Carolina, routinely chronicles successes and failures from her outdoor adventures. She also shares her love of conservation, hunting, shooting and fishing through a series of fun and informative videos and social media posts.

Courtney didn’t jump on the hook and bullet bandwagon for a quick buck. And her connection to creation didn’t happen overnight. Her endeavors are fueled and guided by a lifelong love of the outdoors, along with a desire to encourage others to embrace their outdoor heritage.

“I’ve loved the outdoors from a young age,” she explains. A self-described tomboy, she spent childhood summers on Arkansas’ Beaver Lake, where she began water skiing and fishing at the tender age of 3. “I also spent countless hours camping with my dad or horseback riding with my mom,” she adds.

Courtney also found solace in the natural world. “My parents got divorced when I was very young and I moved from Fayetteville, Arkansas, to North Carolina with my mom. I split my time between these two states and moved a lot. The outdoors was the only stable thing I had, and being outside is still very calming.”

“Hunting, shooting and the outdoors have taught me a lot about myself and what I’m capable of,” she notes. “I have more confidence in myself and more respect for my food than I ever did as a non-hunter.”

She credits a morning in the turkey woods for sparking her interest in hunting. "I heard a tom gobble and was hooked. I took a hunter safety course, got my first hunting license and became a hunter instead of merely an observer.” 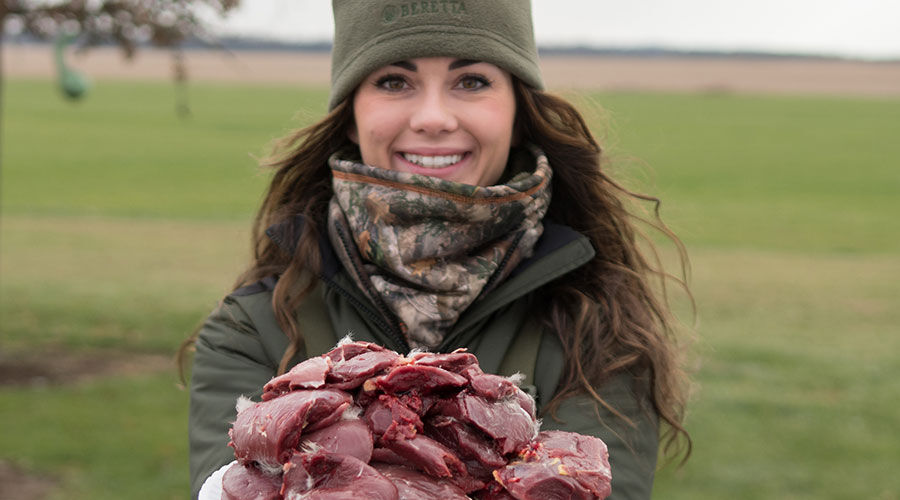 Turkey hunting was just the beginning. Courtney went on to pursue a variety of other game species—though she admits elk and many other species are still on her to-do list. “If I had to choose a favorite type of hunting, I’d have to say turkey or waterfowl,” she says. “I like not having to worry about scent, and love the camaraderie—being able to experience the hunt with others and even talk a little in the blind.”

She also enjoys different shooting disciplines. “I love it all,” she smiles. “Last summer I participated in my first 3-gun competition and had an absolute blast. But if I had to choose one type, it would be long-range shooting. I enjoy the challenge and the focus it takes. In November 2016 I shot a target at a mile, and that’s still one of my proudest shooting accomplishments.”

Courtney’s career in the outdoor industry began at a computer keyboard. “My blog was my first pipe dream,” she recalls. “I realized the reason most girls don’t enjoy the outdoors is they go with a father or boyfriend who outfits them with ill-fitting, unflattering clothing that’s cold and uncomfortable. Through my blog, I wanted to share my experiences and offer advice on choosing gear that would help them have fun.”

Unfortunately, creating a platform on which to share her stories and photographs turned out to be such a roadblock that it nearly derailed her career. “It wasn’t as easy to build a site as it is now, and the cost of having someone create a site was prohibitive,” she reports. For nearly a year, she labored, unsuccessfully trying to build a site that would deliver her message to the world. Finally, a hunt gone wrong convinced her to take a different tack.

“Hunting, shooting and the outdoors have taught me a lot about myself and what I’m capable of. I have more confidence in myself and more respect for my food than I ever did as a non-hunter.”

“When a miscommunication on a hunt caused me to come home empty-handed, I realized how much the sport meant to me,” she says. “It was a turning point, because I decided I didn’t need a website to share my adventures and help others enjoy the outdoors. I turned to social media.”

Using her Instagram account to tell her stories, Courtney built a loyal following who appreciated her honest advice and candor in reporting tales of hunts gone wrong. “My page grew slowly at first, then faster and faster,” she says. “It struck a chord with average hunters, who are struggling to find a place to hunt, get the right gear, and learn how to be more successful.” She soon built an image library that supported her stories with compelling photographs that further drew readers into her adventures.

As the number of her followers grew, outdoor companies took notice—establishing partnerships and contracting Courtney to create and publish content. Soon, such projects became so numerous, she made the “leap of faith” to quit her day job and focus on outdoor promotions full-time. “Today, I help with marketing, social media consulting, content creation and product development,” she says. “It’s a lot more work that people realize, but I’m proud of following my dreams, and consider myself truly lucky to have the opportunity to pursue my passions as a profession.”

She counts the chance to be outdoors, meet new people and experience outdoor adventures in new and exciting places as her career’s greatest blessings. Long hours, extensive travel (often alone) and ample time in front of a computer screen are tradeoffs, but she still wouldn’t have it any other way.

“I’ve also encountered challenges being a female in a male-dominated industry,” she adds. “Some men won’t listen to a woman’s opinion and certain hunting camps haven’t allowed me to visit them. There are also physical challenges for a small-framed person, such as slogging through a deep, muddy duck marsh. But the positive feedback I get from both men and women saying I’ve inspired them to give outdoor sports a try makes it all worth it.”

Looking ahead, Courtney has no plans to slow down. Her goals include becoming more active in conservation and continuing to spread the word that everyone—male or female, big or small, young or old—is welcome in the great outdoors.