When you’re born into a world of firearms and camouflage, ammo and orange, the path to a hunting lifestyle is smooth and straight. But it’s not that way for most of us. Barriers—mental, physical, financial or social—easily block those born outside the hunting ranks. Some face all these barriers. Some face more. And it explains why it’s so hard to recruit adult hunters, especially those from groups that traditionally don’t hunt.

That’s why, in early October 2020, Federal partnered with the Wyoming Women's Foundation to host five women from all walks of life at The Ranch at Ucross, near Buffalo. They’d gathered from all points on the compass to hunt antelope in the sprawling sage and shortgrass prairie that spill out across the northern Wyoming landscape, but they’d ultimately leave with more.

Like all hunts, it was punctuated by high points and low ones, exhaustion and camaraderie, with emotions ranging from laughter to tears. Meet the hunters who experienced it all, get their reactions and see how the event might put them and others on a new path.

She’d never had the opportunity to hunt—at least until she came to camp both eager and anxious for the unknown. Everyone she’d left back home was shocked she was there, especially since she usually preferred trips to beaches and hates being dirty. But lured by the beauty of Wyoming and a desire to harvest an antelope, she was.

“Honestly my family and friends wouldn’t have believed it without the photographic evidence,” she said later. “Even after telling them, some were still in disbelief that I went hunting and got dirty.”

After a day of instruction with camp volunteers who covered everything from gun safety to hunting techniques, Melanie ultimately got into position and killed an antelope. “I can’t really explain what came over me, but I was filled with emotion and a deep respect and appreciation,” she said.

“I had no idea when I embarked on this trip the impact it would leave on me.” —Melanie

But like many first-time hunters, Melanie was bringing home more than food for her table. Hunts like hers carry lessons and perspective that go far beyond the hunt itself.

“I need to learn to be still and quiet more often, and I need to learn in my everyday life to enjoy the moment of each and every day,” she said. “I had no idea when I embarked on this trip the impact it would leave on me. It is certainly up there as one of the top experiences of my life. I hope I get to go again.” 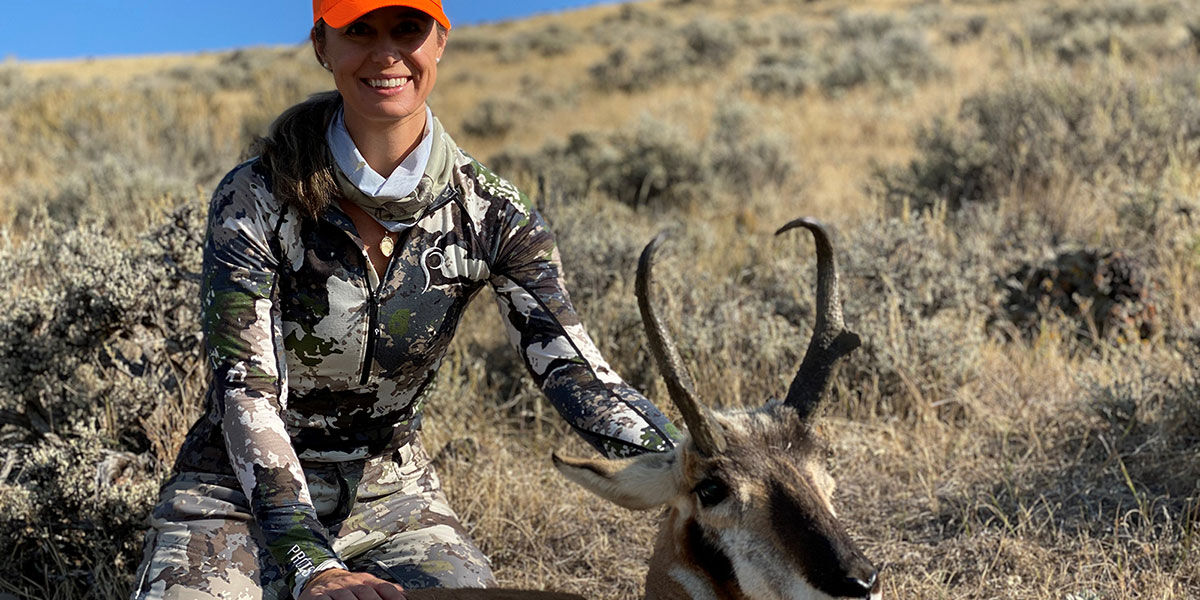 An admitted “poolside gal” whose vacations have generally been built around pampering, spas and shopping, Catherine seemed like an unlikely fit for a northern Wyoming antelope hunt. But an open mind and a desire to learn brought her there, and a day at the range with volunteers melted away any fears.

Like many of the women in camp, she had never hunted before, mostly for lack of opportunity. “It has not been a part of my family’s traditions, nor is it a common activity among my friends or community,” she said. “I’ve been open to hunting, but I hadn’t had an opportunity until now.”

Wyoming didn’t disappoint, and a well-placed shot soon put Catherine next to a beautiful buck—as well as in touch with emotions she’d never known. “Sitting next to my antelope, alone in one of the most beautiful places I’ve ever been, was surreal. I felt calm, confident and deeply humbled,” she said. “I had been curious how it would feel to take the life of an animal. I am a meat eater to the extreme and understand and appreciate what has to happen for it to end up on my plate. However, I am usually very removed from the process.”

The experience also opened Catherine’s eyes to the conservation facets of hunting that usually go unnoticed by the non-hunting—and certainly anti-hunting—public. “I’m very interested in learning more about the stewardship and conservation aspects of hunting. I honestly didn’t realize how they are such core reasons for it,” she said. “I would love to hunt again and will grab any opportunity in the future. Wild game meat will definitely be added into our dinner rotation more often.

“Never be afraid to try something new especially if it’s outside your comfort zone.” —Catherine

But one of her biggest takeaways from the trip was something more significant and lasting than a cooler of antelope meat. It was a potent reminder of how important it is to be open-minded to both experiences and people who are different.

“Never be afraid to try something new, especially if it’s outside your comfort zone,” Catherine said. “The deep importance of listening and sharing with those you don’t always align with is especially important today. It was surprising and refreshing to have some honest conversations with people who have completely different perspectives and life experiences, and then walk away as friends with mutual respect. It gave me great hope!” 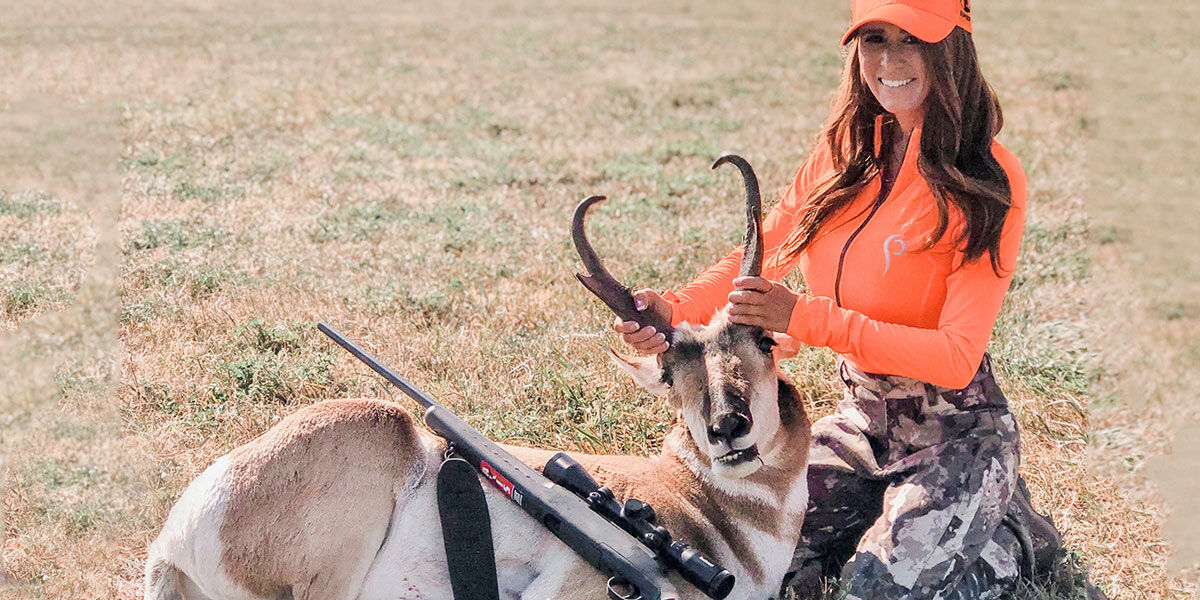 For some in camp, the “first” was not hunting itself, but rather the type of hunt. That was Elizabeth. Although she’s hunted whitetails and turkeys in Minnesota, her experiences were limited to those close-to-home hunts.

“When I was in position and had a clear shot, I knew I had to breathe, slowly pull the trigger and hope for the best!” —Elizabeth

Elizabeth credits the event and its volunteers for doing an excellent job preparing everyone during Day 1 sight-in and field practice work. “I felt so much more prepared on the day of the hunt because of this,” she said.

She put the instruction to good use, taking a great buck with a perfect shot. “When I was in position and had a clear shot, I knew I had to breathe, slowly pull the trigger and hope for the best!”

A desire to eat organic, sustainable, ethically sourced food is a driving force for a lot of newcomers who have joined the hunting ranks in recent years, and Roya is now one of them. Although she’d never hunted before coming to Wyoming, she’d wanted to for several years as a natural extension of her other passions.

“I grow an organic garden, love to cook, and do my best to eat ethically treated meat whenever possible,” she said. “I see hunting wild game as a natural next step in being closer to my food choices.”

Roya tried to get into hunting on her own several years ago, when she signed up for an all-women’s duck hunt, but obstacles blocked her path. “It felt like too much of a stretch to take on a new hobby. Additionally, the cost of acquiring the gear necessary to hunt felt like a barrier to entry,” she said.

She also experienced social obstacles, coming from an area of the country where hunting isn’t as much a part of the culture and where there are more prevalent attitudes against eating meat. “People who love me were a combination of happy for me and appalled. I’m pretty sure the folks who knew I was going didn’t think I would pull the trigger,” she said.

Although her hunt was ultimately not successful by the yardstick of notched tags and full coolers, Roya doesn’t look at it that way. “While I was disappointed, I didn’t feel like a failure at all. I had a shot, lots of ‘first-timer’ technical difficulties, and missed. I walked away proud of myself for doing something new and staying the course.”

She also brought home a clearer understanding of the broader positive impacts of hunting and the hunter’s mindset itself. “Hunters are conservationists at heart. They have extreme respect for the animals and the land, and actively work to preserve wild spaces,” Roya said. “I’ve only scratched the surface on learning how I can be a better steward for our planet and can help maintain healthy wildlife habitats, and I look forward to learning more.”

“I had this profound sense of that spot being exactly where I was meant to be in that moment, and it was really powerful.” —Roya

The highlight of Roya’s trip was sitting on a bluff, watching the sunset and talking with the rest of the hunting group—a party composed of very different people from very different backgrounds. “We sat there for hours, after a long day of walking, more walking and disappointments,” she said. “I had this profound sense of that spot being exactly where I was meant to be in that moment, and it was really powerful.”

Roya now owns a rifle and plans to put it to use hunting wild pigs in California.

Demographically speaking, Rochelle represents a huge chunk of people who are helping turn the tide of declining hunter numbers. Because although she started hunting at an early age, work, family and other factors have greatly diminished her time in the field over the past 10 to 15 years.

“For me, hunting has fallen into the ‘something’s gotta give’ category for many years with an elderly widowed mother and an active son.”

Although she made a great shot on an antelope, Rochelle said the highlight of the trip was getting to know her hunting partner and see her fill her tag on her first hunt.

“I realize now how lucky I was to have a dad who just treated me the same as my brother when it came to our introduction to the outdoors.” —Rochelle

“I got emotional hearing my hunting partner say she would have liked to have learned how to hunt from her dad but was brushed off because it was something for her brother, not her,” she said. “Some of my very earliest memories were from when I was 4 or 5 years old, when I'd go out pre-dawn with my dad to hunt ducks and geese. It just wasn’t an opportunity for every girl at that time. I realize now how lucky I was to have a dad who just treated me the same as my brother when it came to our introduction to the outdoors.”

Her experience renewed her interest in hunting and illustrated that others can do the same. “There are lots of older women either discovering hunting for the first time now that barriers are falling or rediscovering it as their kids have grown and they have time again,” Rochelle said. “You don’t have to be 20 or 30, hunting is something you can enjoy it later in life too."