The big bull was back. Its giant frame swayed into view over the same Colorado meadow where Team Primos® member Brad Farris had spotted him the evening before. His daughter Morgan leveled her .308 and sent a bullet through its shoulders. After a 50-yard sprint, the bull and its 363 inches of antler piled up in the grass.

The encounter might have taken seconds to unfold, but the steps needed to make it successful began long before Morgan’s tag even arrived in the mail. Farris reveals his top tips for planning and pulling off your own successful elk hunt.

Some states’ firearm seasons run when rut is tailing off, so you may want to be among the first in to catch them while bulls are still vocal. However, Farris finds that this is a non-issue in certain states.

“In New Mexico, for instance, you can usually catch them screaming and very callable during the first week of October,” he said.

“We had to hike to get where the elk were but they were just as good as any private-land elk I've ever seen.”

But the rut isn’t everything. Seasonal weather patterns and elk migrations can be just as important.

“In states like Colorado where seasons run in November, mid- to later season is sometimes better because you start to get weather that drives elk down from the high country,” he says. “They’re a little easier to find when that starts happening,”

Like any hunt, choosing a hunting location is crucial. And while public land hunts can get a bad rap, Farris has experienced some excellent hunts on state and federal ground.

“There is a lot of excellent public land,” he says, explaining that one of the biggest bulls he’s shot was on public land in New Mexico.

“We had to hike to get where the elk were but they were just as good as any private-land elk I’ve ever seen,” he says.

As an alternative, consider a consultant. Farris confers with Cabela’s TAGS experts. “They are full of knowledge on the best hunts, best trophy units and the units with the best density of elk,” he says.

The tag of a lifetime won’t do you any good if you can’t hoof it to where the elk are and hang with them wherever they go. That’s why Farris dedicates a lot of time to pre-season conditioning.

“One thing that separates a lot of elk hunters is physical ability to get out there,” he says. “I exercise three to five days a week and consider myself in decent shape, but when you’re at 8,000 to 10,000 feet, it’s still tough. If you’re out of shape, you just limit your opportunities.” 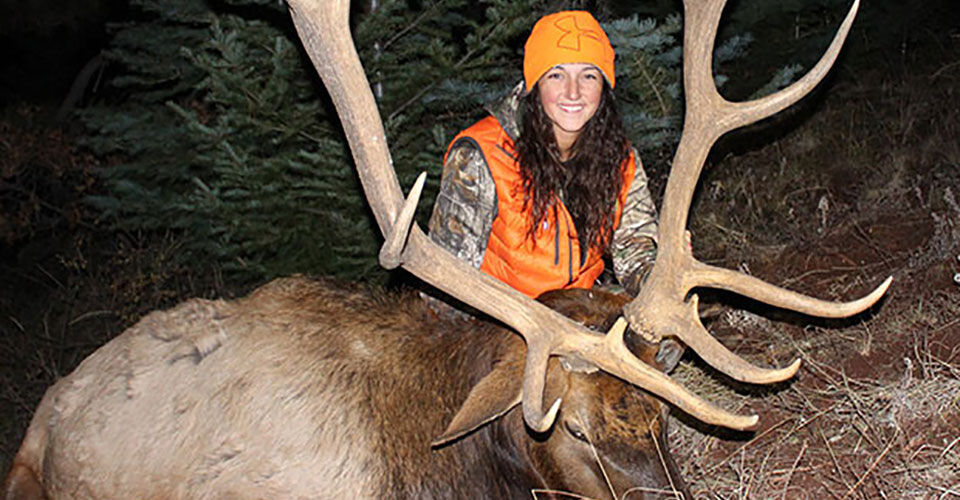 And along those lines, Farris recommends that all elk hunters invest in a good pair of mountain hiking boots.

“If you ruin your feet in the mountains, you’re done,” he says.

Along with physical conditioning, Farris recommends time behind your rifle—both at the range and in the field—to ensure you can make the shot when it matters.

And shot placement on the animal itself is critical to success. Because even a superb marksman can make a bad shot if they’re simply not aiming where they ought to be.

“We owe it to the animal to think about this,” Farris says, recommending that hunters focus on where the bullet is going to come out. Envisioning the exit helps you locate vital organs and plot the bullet’s path through them. If it’s not on track to destroy the vitals, you need to adjust.

Elk are notoriously tough—so much so that even well placed shots can result in a long trailing job if hunters settle for mediocre bullets.

“That’s why Federal Premium Trophy Bonded Tip is my go-to bullet, whether its elk, whitetail or whatever,” he says. “It’s such an advanced bullet. And I like the 30-caliber bullets. I believe there’s not much out there I can’t tackle with that round.”

Most hunters know that calls play an important role in elk hunts, especially those timed during the rut. But Farris relies on them for much more, preferring an open-reed cow call because of the volume.

“You might have to stop an elk at 200 yards or maybe 250 or 300 for the right shot placement,” he says. “You want to stop him for that perfect shot angle. The Primos Hyper LIP single is my go-to call because I can call really loud or really soft.”