It’s likely, especially if you spend much time chasing geese or gobblers, you’ve heard of TSS, the payload of choice for all Federal Custom Shop Shotshell loads. You’ve heard it kills big geese dead and smashes turkeys at distances close and far. The good news: What you’ve heard isn’t hype. It’s the stone-cold truth. The question, for many, is what makes TSS so effective?

When the federal government banned the use of lead shot for waterfowl hunting more than two decades ago, shotshell manufacturers started looking for something better. Lead was far superior to early steel-shot loads, and hunters accustomed to folding ducks over decoys and geese at 50-plus yards were spending a grip of their hunt chasing wounded birds, ringing necks and listening to the sound of steel bounce off feathers. Some waterfowl enthusiasts hung up their guns.

Over the years, lots of loads were developed, launched and tested afield. The performance of steel loads improved, and other materials like iron-alloy and bismuth were put to use. Shotshell lab rats kept working, though, trying to find the perfect blend waterfowlers, upland hunters and turkey nuts could depend on.

They found it. TSS or Tungsten Super Shot is a tungsten-alloy material that boasts a density 22 percent higher than standard tungsten and is 56 percent denser than lead. Now we’re talking. Lead, after all, was the kingpin. Now shotgunners have an option that is denser than lead, which allows it to fly farther and hit harder. Plus, the hardness of TSS causes the shot to maintain its form and create a better killing pattern. Due to the density of TSS, smaller shot sizes can be used to effectively harvest big birds. Pack No. 9 TSS into a 3 ½-inch 12-gauge shotshell and you get a lot of pellets going into the air.

This past season, my waterfowl crew and I crumbled ducks and geese like the days of old. One thing we detest is wounding game, and while it can and still does happen, TSS made it much less likely. My Lab, Kimber, didn’t look like she’d gone three rounds with Mike Tyson after a morning of retrieving Giant Canada geese. We weren’t scrambling through the decoys ringing necks or having to shoot ducks that crumbled in the air, and then hit the water swimming. Birds were dying at distances close and far.

Another advantage of TSS is the fact youth hunters and those who choose to tote lesser gauges can be more effective on longer shots. My son, Hunter, practiced with his 20-gauge for weeks before the Colorado turkey opener. On opening morning, on public dirt, he dropped a tom at 63 yards with a load of Federal Premium’s HEAVYWEIGHT TSS loaded with shot sizes of 7 and 9. Yes, you read that correctly—7 and 9—not 5 and 4. Because TSS is so dense and holds its pattern so well, hunters can use smaller shot sizes which simply means more TSS in the air. Two weeks later, my good friend and first-time turkey hunter Gavin Brady, dropped a 50-yard tom with HEAVYWEIGHT TSS 12 gauge. The bird didn’t even flop.

Throughout duck and goose season, my son, along with other youth, pounded ducks and geese with 20-gauge and even .410 TSS. Shoulders weren’t beat up and none of the kids were shooting a kick-like-a-mule load from a 12-gauge that was simply too much gun for their age and size.

Where shooters get hung up on TSS is the price. Yes, it’s expensive. With that noted, you need to experience it before the “I’d never pay that much for shotgun ammo” talk starts. I’ve killed 10 toms with 10 TSS shells, and three of those pressured, public-land birds were taken beyond 60 yards. Our duck and goose body counts have grown tremendously, and this past season when I took an old-time goose hunter and let him shoot some Central Flyway Arctic nesting honkers, he looked me dead in the eye and said, “This stuff reminds me of the good old days.”

Performance like that is now just a few clicks away through Federal Custom Shop. There, shooters can select from dozens of different combinations of gauge, shell length, payload weight and shot size—all with TSS's now-legendary range, patterns and lethality. Take advantage of it, and you’ll be killing more birds at longer range than ever before.

There’s no such thing as a shotgun approach with Federal Custom Shop. Craft personalized loads for any shotgun or application by choosing from a full array of Tungsten Super Shot payloads for waterfowl, upland and turkey hunters. 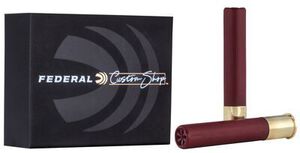 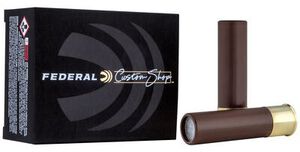