Bonded Construction In A Match-Style Bullet

Terminal Ascent seamlessly mates a tough, bonded hunting bullet with an accurate, match-style projectile without sacrificing any aspect of performance. And, unlike other so-called long-range hunting bullets that can fail to perform on impact at lower velocities, Terminal Ascent expands as designed at close, moderate and long ranges.

The design is based off Federal’s proven Trophy Bonded Tip, which originated from the famed Trophy Bonded Bear Claw—both are among the most effective hunting bullets in history. Its bullet has a tapered jacket, bonded lead core, and long, solid copper rear shank to give shooters that bone crushing, hard-hitting performance they need for hunting situations. The bullet retains its weight for consistent, lethal penetration at any range.

Its match-style features include a secant ogive and AccuChannel groove technology for the best possible long-range ballistics. Its boat-tail angle and length are optimized for peak ballistic coefficient (BC) and stability.

The match-style hunting bullet also features a small meplat for better aerodynamics. Meplat is the technical term for the flat or open tip on the nose of a bullet. The shape of the meplat is important in determining how it moves through the air. Terminal Ascent’s meplat results in its excellent ballistics and accuracy.

Grooving on a bullet shank improves accuracy across a greater range of rifles while reducing fouling and barrel wear. However, typical grooving can cause aerodynamic drag, resulting in more bullet drop and wind drift. AccuChannel groove technology used in Terminal Ascent is different.

When developing the bullet, Federal engineers ran a series of accuracy experiments testing both the number and location of grooves. In the process, engineers made a breakthrough and discovered that by strategically placing one or two grooves, they could achieve the same benefits and accuracy as three grooves used in Federal’s older bullet designs. It was a tremendous finding, as each conventional groove causes approximately a 5 percent BC drop.

To improve the aerodynamics even further, our engineers used computational fluid dynamics modeling (CFD) to change the groove geometry to reduce drag. The industry’s typical groove has 90-degree steep walls, whereas AccuChannel has a sloped rear wall, which lets the air flow in and out of the groove, reduces pressure on that point, and minimizes drag.

The result is a bullet can perform better across a greater range of rifles without increasing wind drift or drop, which greatly simplifies extreme-range shots.

Polymer tips are a common feature on modern bullets. But the Slipstream tip used in Terminal Ascent is completely different than other designs, and it has a huge effect on what the bullet is able to do. Most importantly, the tip’s hollow core initiates expansion even when the bullet is traveling at lower velocities.

Federal engineers arrived at the patented design after testing of other tipped bullets revealed they failed to expand consistently at distances past about 600 yards. A new approach was needed to ensure all-range performance.

The inspiration came when the Federal engineering team drilled a hole all the way through the center of the tip. Upon impact, that hole would allow target media into the front end of the bullet to initiate expansion. The engineers tested that concept and it worked perfectly, extending the effective range a few hundred yards.

Further testing and development lead to another breakthrough—one that not only improved terminal performance but enhanced accuracy and decreased drag. The engineers found they could actually close the front end of the tip and the bullet would still expand on those low-velocity impacts, because the front end of the tip would break off and reveal the channel, allowing media to enter.

This discovery allowed engineers to maintain the small, aerodynamic meplat of a solid polymer tip to maximize the BC while getting the same guaranteed expansion at distances where other bullets fail to open consistently.

The Slipstream tip’s hollow core sets it apart from all other polymer tips—but it’s also unique in its resistance to the elevated temperatures a bullet experiences during flight. The tip’s high-tech material is actually the same one Federal has used for a decade in the popular Trophy Bonded Tip bullet. It has a glass transition temperature—or softening point—of 434 degrees Fahrenheit. This unmatched heat resistance gives shooters the extremely consistent ballistics needed to make accurate long-range shots.

Extreme-range hunting and target shooting is getting more popular every day, so shooters are giving more attention to bullets’ BC than ever before. However, there is some confusion about what it actually means. Simply put, it’s a measurement of how well a bullet cuts through air. The higher the BC, the better. It can also define how well a bullet maintains its velocity downrange. More velocity and energy equates to less wind drift, flatter trajectories and better terminal performance.

Every aspect of the new Terminal Ascent bullet profile has been engineered to maximize ballistic coefficient. Its sleek, elongated boat-tail profile and secant ogive are critical parts of the performance package, and like the rest of the bullet’s design, they didn’t happen by accident. Longer boat-tails yield higher BCs. The tradeoff is lengthy tails can reduce stability. To conquer this, Federal engineers determined the optimal boat-tail angle and extended the length as far as possible without taking a bite out of bullet stability.

To further boost BC, engineers selected bullet weights that are as heavy for caliber as possible while still maintaining stability, even in extreme conditions, through the different barrel twist rates common in today’s wide array of hunting rifles.

All this equates to shooters getting the flattest trajectories, the least wind drift and the highest confidence they are going to make their shot. For example, the 155-grain 280 Ackley Improved bullet has a .586 G1 BC, and the 130-grain 6.5 Creedmoor bullet has a .532 G1 BC—two of the best for hunting bullets in the industry.

With the growing popularity of long-range big game hunting, it’s not hard to find ammunition claimed to offer the accuracy and downrange terminal performance to do the job. However, to even come close to filling this tall order, these options are often built like varmint bullets, with thin jackets to encourage expansion at the low velocities experienced at longer ranges.

Unfortunately, when the bull or buck of a lifetime steps out of the brush at 20 yards, such single-purpose projectiles can completely blow apart under the high velocities of close-range impact, resulting in shallow penetration, low weight retention and poor terminal performance. 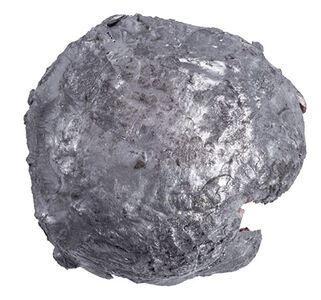 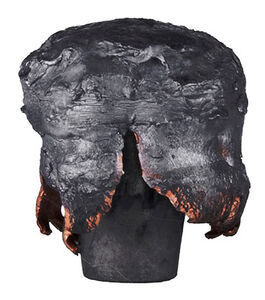 Terminal Ascent doesn’t make such sacrifices, combining its extreme-range expansion capabilities and accuracy with the bonding and heavy-duty construction of the world’s toughest hunting bullets. Its robust bonding and copper shank consistently provide 90 percent weight retention upon high-velocity, close-range impact for deep wound channels. With the Slipstream polymer tip, the design still expands reliably at the longest distances. There's no other bullet on the market that has this wide of a velocity spectrum. Photos are of prototype Terminal Ascent bullet upsets taken at a velocity of 2,757 feet-per-second.

Deadly terminal performance means the bullet penetrates straight through its target and transfers energy along the way. But, lethal expansion doesn’t always look the same at every range, and a large expanded diameter is not always required for a bullet to make a clean kill. Bullets kill at long range not through sheer expansion but by opening the nose consistently and creating a uniform frontal surface. Most bullets don’t do this. A typical bullet will fail to expand symmetrically, causing it to veer off target within the animal, or tumble. The distance at which it begins to tumble is very unpredictable. Sometimes it will travel a great distance before it does and sometimes it will tumble immediately.

Federal Premium Terminal Ascent is completely different. Its engineers designed it for flawless expansion at a wide range of velocities, from blistering speeds at the muzzle all the way out to extreme ranges where velocity falls off. At all distances within this vast range of velocities, the round reliably expands within the first couple inches of entering the target and punches deep or straight through, dumping devastating amounts of energy in the process. 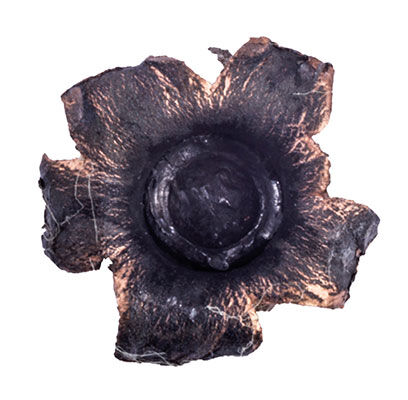 Its externally skived nose, exclusive hollow-point shape and Slipstream polymer tip work together to expand immediately and consistently. From the muzzle velocities all the way out to 1,350 feet per second, Terminal Ascent gives frontal expansion. It’s why this ammunition stands apart from all other bullets, transferring its energy into the animal and carving straight, lethal wound channels that bring down big game at any range. Photos are of prototype Terminal Ascent bullet upsets taken at a velocity of 1,484 feet-per-second.

In a marketplace filled with competitor loads that make tradeoffs—sacrificing short-range terminal performance for long-range expansion, or toughness for accuracy—Terminal Ascent does it all and stands alone. 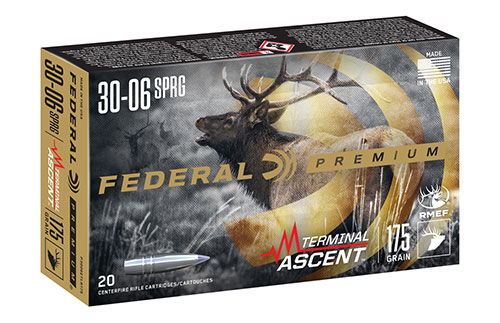 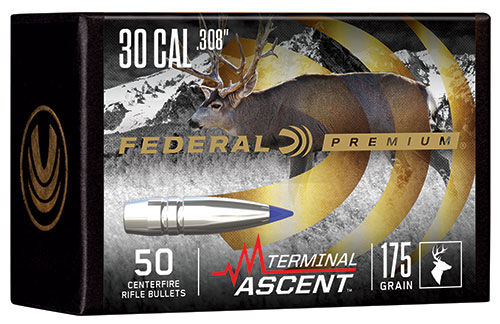 There’s never been a hunting bullet that compares. Period.