Using a handgun for self-defense is never a static discipline, as you must constantly refresh, improve and adapt your skills to new situations. Likewise, even iconic tools of the trade have to evolve.

It’s no surprise that Federal Premium’s Hydra-Shok Deep is at the forefront of that movement. This new round builds off the time-tested Hydra-Shok platform to better meet modern performance measurements. And the improvements will give handgunners a big boost.

“New Hydra-Shok Deep offers consumers a round that results in consistent, reliable performance through typical defensive barriers and penetrates to the depth deemed optimum by the leading law-enforcement agency in the United States,” said Larry Head, director and chief engineer of handgun ammunition.

Hydra-Shok Deep was initially launched in 9mm Luger 135-grain. Recently, it has also been released in 99-grain 380 Auto, 130-grain 38 Spl. +P, 40 S&W 165-grain and 45 Auto 210-grain. This new ammunition product line is recognized by its customers—and the industry—for its improved penetration and superior reliability. This is proven by it winning a 2019 NRA Golden Bullseye Award for “Ammo of the Year” by Shooting Illustrated magazine.

To qualify for the Shooting Illustrated Golden Bullseye Ammo of the Year award, the product in question must be available to the public, must have been tested and either met or exceeded our testing-and-evaluation protocols and offer a unique value to the American shooting public, whether by innovation, affordability or other stand-out qualifications. For 2019, Federal Premium's Hydra-Shok Deep was chosen for the prestigious award.

"Every round of Federal Premium Hydra-Shok Deep I tested penetrated between 15 and 16 inches, and expanded to at least 1.45 times its original diameter. Considering bullets weights ranged in weight from 135 to 210 grains, and in diameters from .356 to .45, that’s quite impressive,” said Shooting Illustrated ammo editor Richard Mann. “Federal also supplied me with 100 rounds of each load for follow-up testing. Terminal performance is one thing, but reliability is another. You can have the best bad guy-stopping bullet in the world, but if it will not cycle and feed in your handgun, all you can really count on is one shot. I tested these loads by firing one box each in a variety of handguns, including a Smith & Wesson M&P, several 1911s and Glocks, a Browning Hi Power and the new SIG Sauer P365. There were no stoppages or failures to fire.”

Hydra-Shok has been a self-defense staple since its debut in 1989. At that time, the FBI had requested a projectile with better terminal ballistics than traditional cup-and-core bullets, and Federal responded with Hydra-Shok, which uses an expanding bullet with a notched jacket, non-bonded lead core and unique center-post hollow-point design. That provided better penetration and more consistent threat-stopping expansion than other bullets at the time. 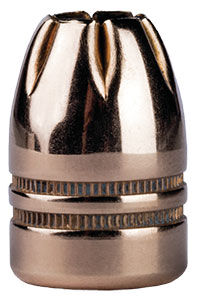 “Original Hydra-Shok was designed toward the end of the ’80s around the then-current FBI philosophy of how a bullet should perform and protocol testing to evaluate that performance,” Head said. “Over time, the FBI performance requirements has been evolving, and their protocol testing has similarly been evolving to match. One of the most notable changes has been the desire for deeper-penetrating rounds and more consistency in penetration depths though all the intermediate barriers.

“Enter Federal Premium’s engineers, who, in the more than 28 years since the introduction of original Hydra-Shok, have learned a lot about terminal ballistics and projectile performance. Although original Hydra-Shok remains very effective, designers knew they could make it better. Hydra-Shok Deep achieves that, making remarkable improvements on the groundbreaking original concept.

The new Hydra-Shok Deep bullet features a core design that provides up to 50 percent deeper penetration than original Hydra-Shok and similar loads from competitors, and the center post has been improved so it’s more robust, which provides better integrity and performance through barriers. Testing shows that Hydra-Shok Deep penetrates 15 inches in bare ballistics gelatin, which is the optimal depth, according to FBI standards.

“The primary goal of Hydra-Shok Deep was to penetrate to the FBI’s optimum depth of 14 to 16 inches and at the same time provide more consistent performance though the intermediate barriers,” Head said. “We also wanted to develop a round that would score significantly better through the FBI protocol testing than standard Hydra-Shok. Hydra-Shok Deep does all of this with a 70 percent improvement in FBI protocol score.”

Although the bullet’s performance in ballistic gelatin is impressive, many shooters might wonder how Hydra-Shok Deep will boost their real-world performance. Head explained why the remarkable improvements in expansion, penetration and integrity through defensive barriers are especially important to self-defense.

“Ideal bullet performance is a round that stops a threat by expanding to a large diameter to cause the maximum amount of tissue damage and penetrates deep enough to reach vital organs,” he said.

“In a self-defense situation, your ammunition has to be completely reliable in igniting the propellant and providing the correct and consistent energetics. This not only pushes the bullet to its optimum working velocity but also reliably functions the gun,” he said. “A failure in this area could lead to catastrophic results. The propellants also contain flash suppressants to reduce muzzle flash and minimize temporary blindness in low-light shooting situations.”

Hydra-Shok Deep has quickly become a favorite of those who rely on ammunition to protect themselves and their families. Those shooters can take solace in knowing a longtime self-defense staple has adapted and enhanced to meet 21st-century challenges.

Federal Premium® Hydra-Shok® has proven itself for self-defense since 1989. Hydra-Shok Deep™ builds off the time-tested platform with design improvements that better meet modern performance measurements. The bullet features a more robust center post and a core design that penetrate to optimal depths through the barriers most commonly encountered in self-defense situations.