ANOKA, Minnesota - January 22, 2020 - Federal is excited to announce its new HammerDown product line. This full line of ammunition features molecularly bonded hunting bullets designed with velocities for optimal cycling and overall ballistic performance in lever-action rifles. At launch, HammerDown will be available in seven of the most popular lever-action cartridges including 357 Magnum, 327 Federal, 44 Rem. Magnum, 45 Colt and more.

The new lever-gun ammo will be on display in Booth No. 14551 at the 2020 SHOT Show, January 21-24 at the Sands Expo Center in Las Vegas, Nevada. New Federal Premium HammerDown is scheduled to ship in the Spring of 2020.

HammerDown was designed in collaboration with Henry Repeating Arms, two companies steeped in and proud of their made in America heritage. When you set out to build the best lever-action rifle ammunition, you go to the industry’s leading lever-gun manufacturer. Henry Repeating Arms is known for top-performing lever-action rifles with excellent, made-in-America craftsmanship. Outstanding examples of rifles popular with hunters include their Big Boy All-Weather and Big Boy Steel models. Henry’s insight into the classic firearm platform helped ensure the utmost reliability and accuracy from each load.

For the initial launch of the HammerDown product line, Federal selected the most popular lever-action rifle calibers. This includes 327 Federal Magnum, 357 Magnum, 44 Rem. Magnum, 45 Colt, 30-30 Win., and 45-70 Government. The 35 Rem. cartridge will come soon after the initial product launch. Other cartridges could be added in the future to grow the product line.

HammerDown is specifically engineered for any and all lever guns. It is designed to function flawlessly in side-gate loading and tubular magazines. To do this, Federal chamfered the case of all HammerDown cartridges. These improved cases feature specialized geometry on the front face of the case’s rim. This difference improves cycling in all lever-action feeding systems.

All options in the HammerDown product line feature molecularly bonded bullets. Federal’s time-tested bonding technique delivers best-in-class expansion and weight retention on impact. Since many of the products in the HammerDown lineup are traditionally handgun cartridges, Federal loaded those cartridges with heavy-for-caliber bullets and set them to increased velocities to deliver better depth of penetration when shot out of longer rifle barrels.

All other components are of the highest grades of quality in the industry. The precision-built cases feature nickel-plated brass that defeats corrosion and aids in sleek, smooth extraction in the most extreme conditions. The clean-burning, consistent powders are specially formulated to meet the most stringent specifications. Gold Medal primers are manufactured to exacting tolerances to deliver precise and reliable ignition.

HammerDown is packaged in traditional long, flat rifle ammunition boxes in 20-count quantities. Since cartridges such as 327 Federal Magnum, 357 Magnum, and 44 Rem. Magnum—traditionally known to be handgun cartridges—are now optimized for a use out of a rifle, Federal put them in rifle packaging. This move helps customers make that distinction.

All these features define HammerDown as purpose-built ammunition targeted to hunters who use lever-action rifles. HammerDown is attractively priced. Manufacturer's Suggested Retail Price (MSRP) is $19.99 for all cartridge offerings, except 45-70 Government which is $38.99. 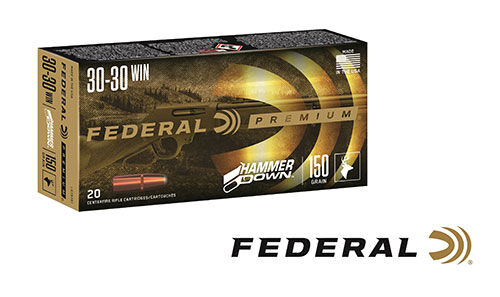