Federal’s early history is a record of near-misses, what-ifs, and critical decisions. Despite all the odds against it, Federal did succeed and that success can largely be credited to a handful of early employees. Here’s a look at the key figures in Federal Cartridge Company’s formation.

There would be no Federal Cartridge Company today if it weren’t for brothers Louis and Harry Sherman. From 1913 to 1914, both brothers served as officers at the Sportsman Cartridge Co. in Kansas City, Missouri.

After leaving Sportsman Cartridge, Harry Sherman went to work for the Western Cartridge Co. while his brother Louis worked for Brass and Metals Manufacturing Co. in Kansas City. By 1916, both brothers were living in Anoka, Minnesota, and had decided to start their own company—Federal Cartridge and Machine.

The Sherman brothers secured capital from several Minneapolis investors and, in October of 1916, construction began on the original Federal plant in Anoka. On January 9, 1917, the company manufactured its first shotshell. But by April 1917, conflicts between the board of directors and the brothers resulted in a split.

The Shermans discontinued their involvement with Federal and disposed of their stock in the company. Paul Seidel remained president of the company, but production numbers never reached stated goals, and by 1920, the plant was shuttered.

John Haller was born in Wood River, Illinois, and went to work for Western Cartridge Company in East Alton in 1898. In March of 1918, he began working at Federal Cartridge and Machine. When the company went into receivership, Haller, the watchman, and fireman were oftentimes the only employees in the building for days at a time.

In the April 1943 edition of Federal’s corporate newsletter, The Monark, Charles Horn describes meeting Haller at the plant for the first time when he traveled to Anoka to inspect the factory shortly after he’d purchased Federal.

“I found the building cold and deserted—except for one person, Mr. John Haller,” Horn wrote. “He had fixed up an office or washroom on the second floor, equipping it with an old stove.”

It was Haller’s makeshift office where Horn ate his first lunch in the new factory he had purchased. In that issue of The Monark, Horn expressed his appreciation for Haller’s dedication to the company and his skill as an engineer.

“I knew nothing about the ammunition business, and I learned the hard way under Mr. Haller’s teaching.”

Haller became Federal Cartridge Corporation’s first employee when Horn appointed him factory superintendent in 1922. Federal employees described Haller’s mind as a “mesh of wheels,” and he engineered and constructed many early machines used in production himself. Haller worked at the company until 1954 when he retired but remained on as a consulting ammunition engineer. He died at his home in Anoka in 1959.

Charles Lilley Horn was born on March 5, 1888 in Mount Vernon, Iowa. He attended the University of Minnesota, where he initially majored in forestry before graduating with a law degree in 1912. After college, Horn began working at the American Ball Company, a manufacturer of ball bearings in Minneapolis.

While working as an executive at American Ball, it came to Horn’s attention that local children were sneaking into the company’s scrapyard and stealing cast-off bearings to use as ammunition in their air rifles. Whereas many executives might have remedied this trespassing by increasing security, Horn decided instead to use the information to increase revenues by expanding into the air rifle ammunition market. 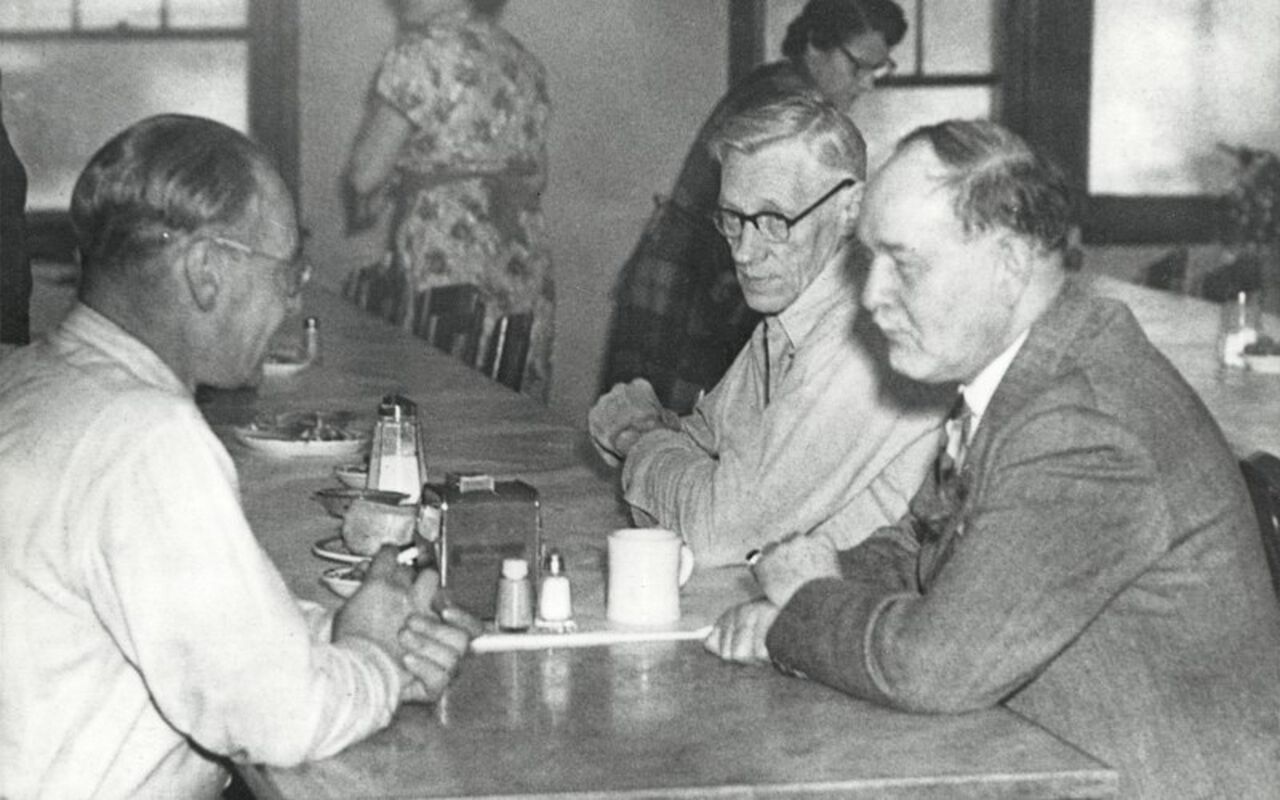 Horn (r.) has lunch with two of his employees. He took the time to learn his employees’ names and listened to their suggestions for improving manufacturing processes.

The decision proved profitable for American Ball, but Horn was faced with the challenge of finding suitable packaging for his new air rifle ammo. He engineered a paper tube to hold ammunition, but the challenge proved to be finding a company that could manufacture these tubes.

Horn knew nothing about manufacturing ammunition, but he was a savvy businessman. Since larger ammunition brands controlled trade channels, Horn had to use creative marketing tactics. He sent hand-typed letters to dentists, doctors, barbers and family-owned hardware stores throughout the Midwest, encouraging them to sell Federal shotshells and rimfire ammunition in their stores. Many of these shipments Horn delivered himself in his red Buick Tourer.

Horn also delivered paychecks to his employees, who anxiously awaited the arrival of his Buick each Friday during the brand’s early days. On a few occasions, Horn never showed, but when profits began to materialize and demand for Federal ammunition increased, the always-natty Horn never missed an opportunity to distribute employee paychecks personally.

Internal memos found in Federal’s archives demonstrate that Horn was dedicated to the safety and welfare of his employees, too. In a 1933 memo to plant manager Bob Ehlen, Horn said he was “ashamed to have an employee of this company go in and eat in such a place,” and in addition to signing the typed letter, Horn also wrote, “clean up or close up!” Horn’s commitment to safety would later prompt him to start Hoffman Engineering, a company within Federal that manufactured safety equipment.

Horn believed hunters played a vital role in conservation, and he supported many organizations that worked to preserve the health of ecosystems and protect both game and non-game species. Horn served as chairman of the Minnesota Conservation Commission beginning in 1933.

The following year, he helped establish 4-H conservation camps across the country, which Federal sponsored. In the 1930s, Federal commissioned a series of informative advertisements and posters encouraging hunters to shoot safely, take no more than their limits, clean up at campsites, and more. In 1955, Horn was named to the Minnesota Water Resources Board.

One of Horn’s greatest achievements was obtaining an $87 million government contract to construct and operate the Twin Cities Ordnance Plant in New Brighton, Minn., in 1941. The plant produced more than 5 billion rounds of .30-, .45-, and .50-caliber centerfire ammunition during World War II. Federal employees were sent to Frankford Arsenal in Philadelphia, Penn., to learn to build centerfire ammunition, and their knowledge, along with capital and machining resources provided by the TCOP contract, allowed Federal to manufacture rifle and handgun ammunition beginning in 1963.

Charles Horn stepped down as president of Federal in 1974 and assumed the position as chairman of the board. In 1977, his son William took over as president. In 1978, shortly after retiring from Federal, Horn died at the age of 90.

Bob Ehlen joined Federal while still in high school, initially working as the company’s groundskeeper and in the mail room. Ehlen was a motivated, diligent worker, and shortly after he was hired, Ehlen could operate every machine in the factory. He also worked assembling parts and in the packaging department.

While still in his early 20s, Ehlen had proven himself to be an employee capable of mastering new tasks in short order. In 1929, just six years after he started work at Federal, the 23-year-old Ehlen was promoted to plant manager.

In 1940, Ehlen was named vice president and general manager. Shortly, Federal secured the contract to construct and operate the Twin Cities Ordnance Plant, the second largest ammunition plant in the world at the time.

Ehlen inspects a .50-caliber round at TCOP during the war. Ehlen worked for Federal for more than 50 years, serving as plant manager and eventually chairman of the board.

At the height of the war, TCOP employed 26,000 people, and Ehlen, still in his 30s, was given the task of overseeing manufacturing at the factory. His dedicated service earned Ehlen high praise both from executives at Federal and government employees alike.

So valuable were Bob Ehlen’s efforts that when he asked to join the military, the government denied his request because his work at TCOP was deemed essential. Ehlen served on Anoka’s city planning commission and on the Anoka school board. He also served as the town’s mayor for 12 years. At Ehlen’s request, Federal funded Anoka’s city hall, a public swimming pool, a hospital, and other facilities to enhance the quality of life in the area.