Federal Under Another Name

It’s hard to imagine today, but before the late 1960s, few American shooters bought firearms or ammunition through dedicated gun shops, outdoor stores on online retailers. In most areas, guns were regarded as “hardware” items, and the national hardware show was a premier sales event for the gun industry into the 1960s.

So, it’s not surprising that in the early history of Federal, founder Charles Horn enlisted barbers, doctors, blacksmiths: anyone who could move ammo. Lists of Federal dealers from the 1920s show lots of grocery and feed stores along with local hardware suppliers. Ammunition was not a regulated item in most of America, and you might find it anywhere.

While these small dealers were content to provide ammunition under Federal trademarks, certain larger customers wanted to sell ammunition under their own brands. The greatest of these was Sears, Roebuck & Co., a retailer that is much diminished today, but that was the Amazon of its time. It issued its first catalog in 1896 and sold a panoply of guns, both domestic and imported, at prices that infuriated U.S. manufacturers like Winchester, which refused in the early 1900s to sell to Sears. 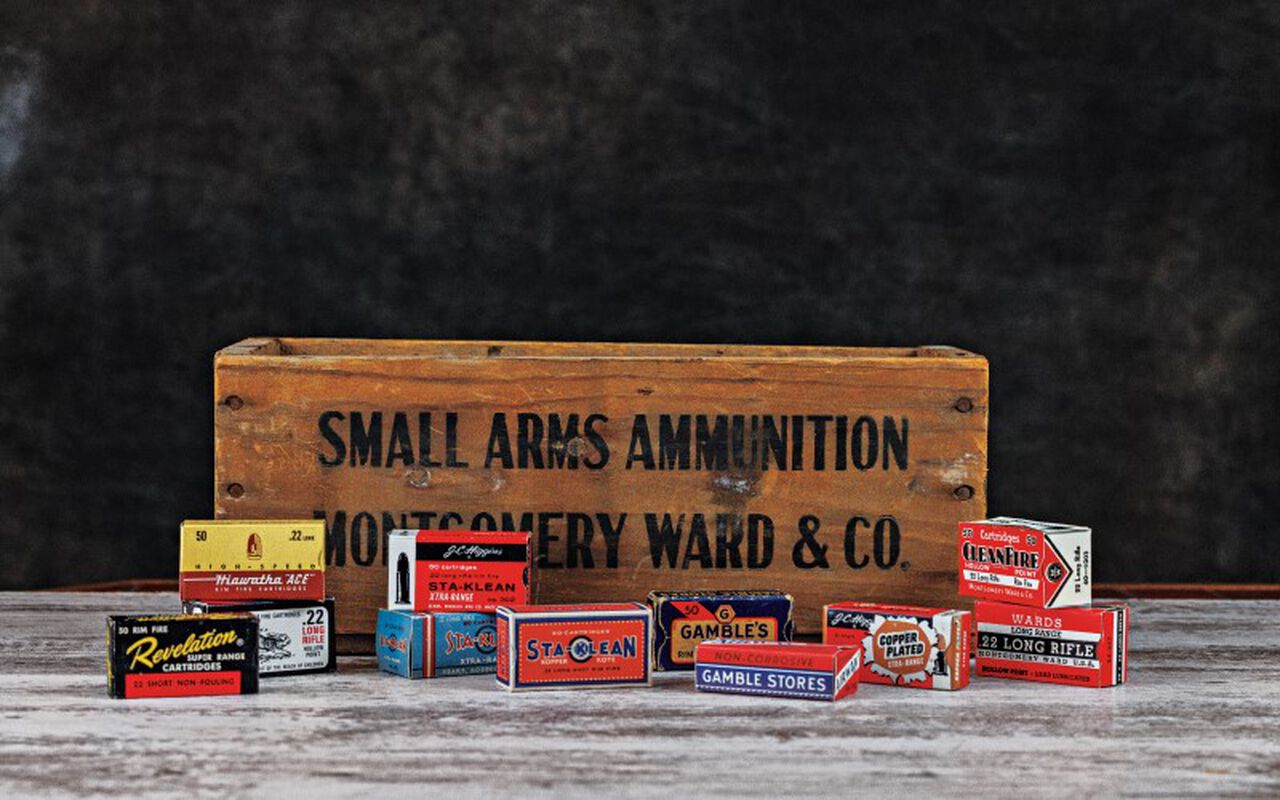 Shotshells, rimfires, and even BBs were sold under house names like CleanFire, Hiawatha, J.C. Higgins, and Revelation. Almost all these retailers are no longer on the scene.

Sears responded by establishing its own gun factory, Meriden Arms, in 1905. Sears used a variety of fanciful and sometimes deceptive brand names like S. Holt Arms, Long Range Wonder and Gladiator. Sears wanted private-branded ammunition to go with the guns, so Federal began loading specially marked Sears shotshells in 1927. As was customary at the time, packaging was illustrated to relieve the buyer of the need to check dram equivalent, charge weight and shot size.

All three versions were called “Sport Loads,” with the Pointer brand designating upland loads, Mallard for duck ammo, and a Canada goose for the X-tra Range high-brass shells.

Sportload (one word) became a trade name in the 1930s and designated the low-brass ammo, the X-tra Range denoting the high-brass shells.

These designations continued through the 1950s and 60s as Sears sold shotshells under the J.C. Higgins name that covered all its outdoor products. They were retained from 1965, when plastic hulls replaced paper, and later when Boston Red Sox slugger Ted Williams became the face of Sears outdoor products.One of the purposes of the Gun Control Act of 1968 was to get catalog retailers like Sears out of the gun business by prohibiting sales through the mail. It succeeded in that aim, and Federal made no more Sears ammo after 1971.

Sears and its crosstown Chicago rival Montgomery Ward sold Sta-Klean rimfire ammo beginning in 1930. This was thanks to the good offices of Frank Olin. He helped transfer the business from Winchester, which supplemented Federal production for low-demand items like 22 WRF.

Montgomery Ward was the senior Chicago catalog retailer, dating to 1872. Similarly, it was the first big “wish book” seller to offer Federal-made shotshells beginning in 1923. These were styled “Red Head” and featured distinctive multi-colored artwork spotlighting a Canada goose. The harsh Depression years saw that simplified to a two-color treatment. 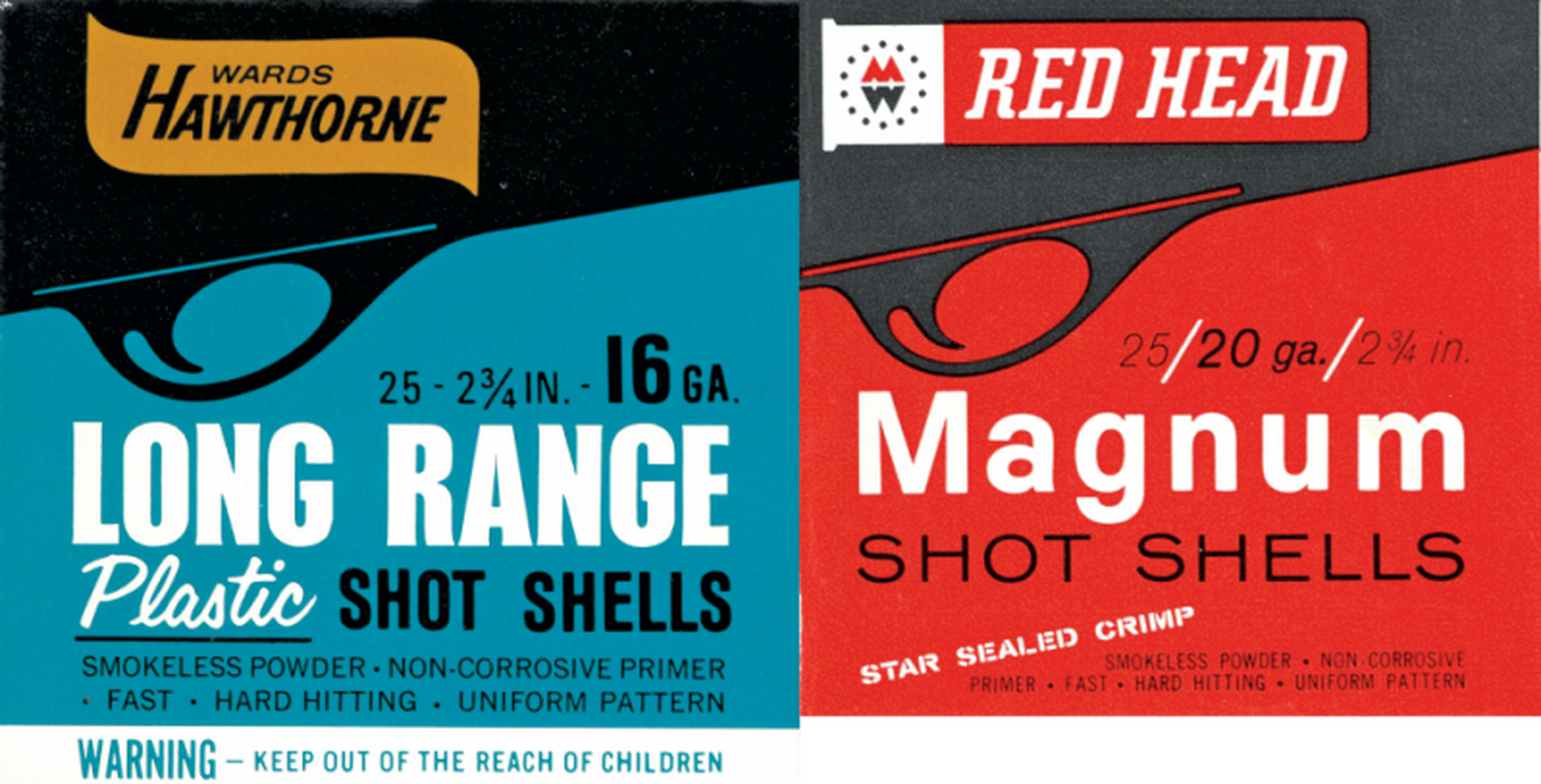 Red Head was used as Montgomery Wards’ trade name for ammo from 1923 until replaced by the Hawthorne mark used for all sorts of outdoor products.

In the 1950s, ammo was rebranded to the Hawthorne trademark used on all Wards outdoor goods. Standard-velocity shells were designated Reliance, while the stiffer loads were Long Range and Magnum. Plastic hulls replaced paper around 1965.

Montgomery Ward persisted a bit longer than Sears as a Federal customer, lasting until 1981. But management failed to adapt to changing times, and Wards filed Chapter 7 bankruptcy in 2000.

Gamble’s Stores, a division of Gamble-Skogmo, was headquartered in St. Louis Park, Minn., about 20 miles south of Anoka. Like many chain stores of the time, it catered to small-town Americans with everything from women’s clothing to tractors. It began selling Federal shotshells and rimfire ammo in 1929 under a confusing collection of trade names including Ace, Airway, S&G and Tiger. These were used by themselves or combined with the Hiawatha name.

Gamble’s also sold private-branded centerfire rifle ammo before 1979. Gamble-Skogmo, which by the late 1970s had 4,300 stores, was sold to a California company in 1980 in a leveraged buyout. The buyout was apparently over-leveraged since the combined companies went bankrupt in 1982.

Western Auto began selling auto parts in Kansas City in 1909. It expanded to a variety of hard goods lines, and had about 1,200 stores throughout the nation by the 1980s. It sold guns from High Standard, Mossberg and Savage, as well as Federal-manufactured shotshells and rimfire ammunition under one of the great trade names, Revelation. Western Auto was sold to Sears in 1988, which in turn sold it to Advance Auto Parts in 1998. 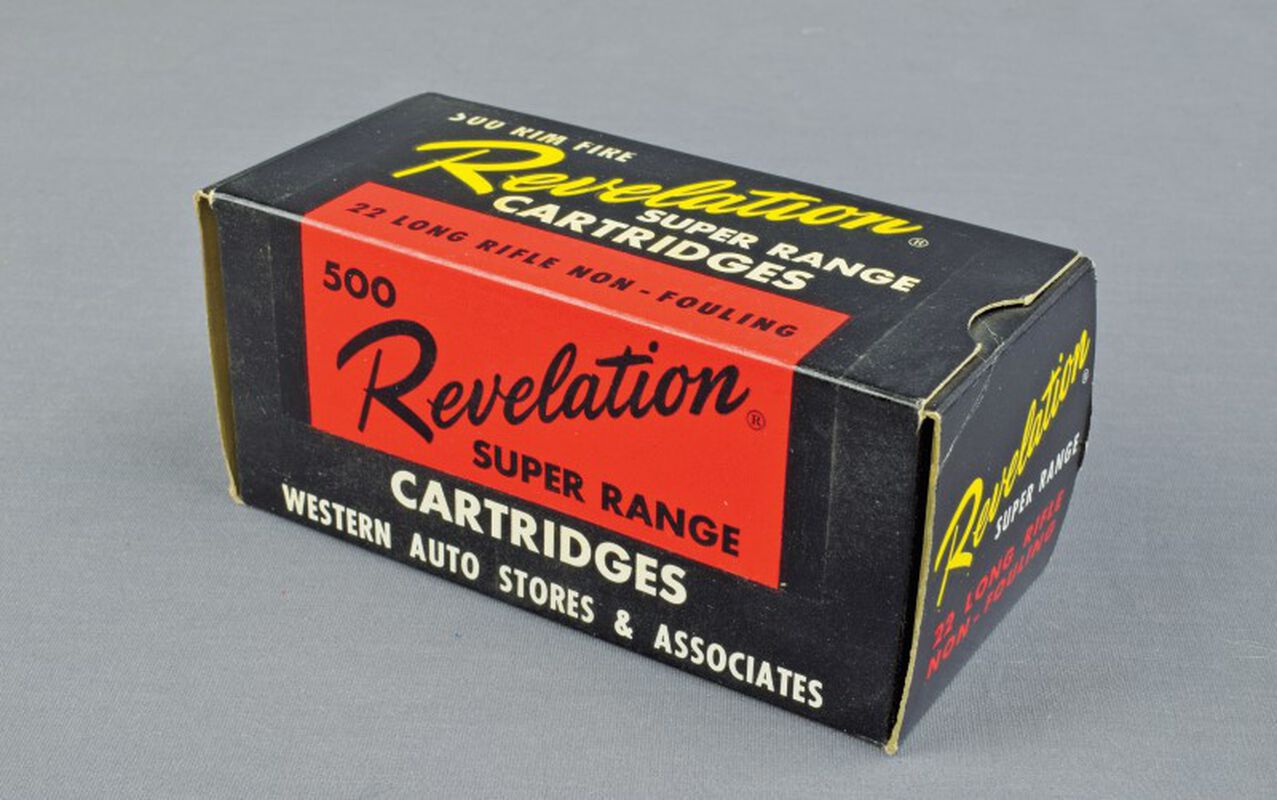 Revelation was the brand name of Western Auto, a retailing pillar of small-town America from 1909 to 1988, when it was sold to Sears, Roebuck. 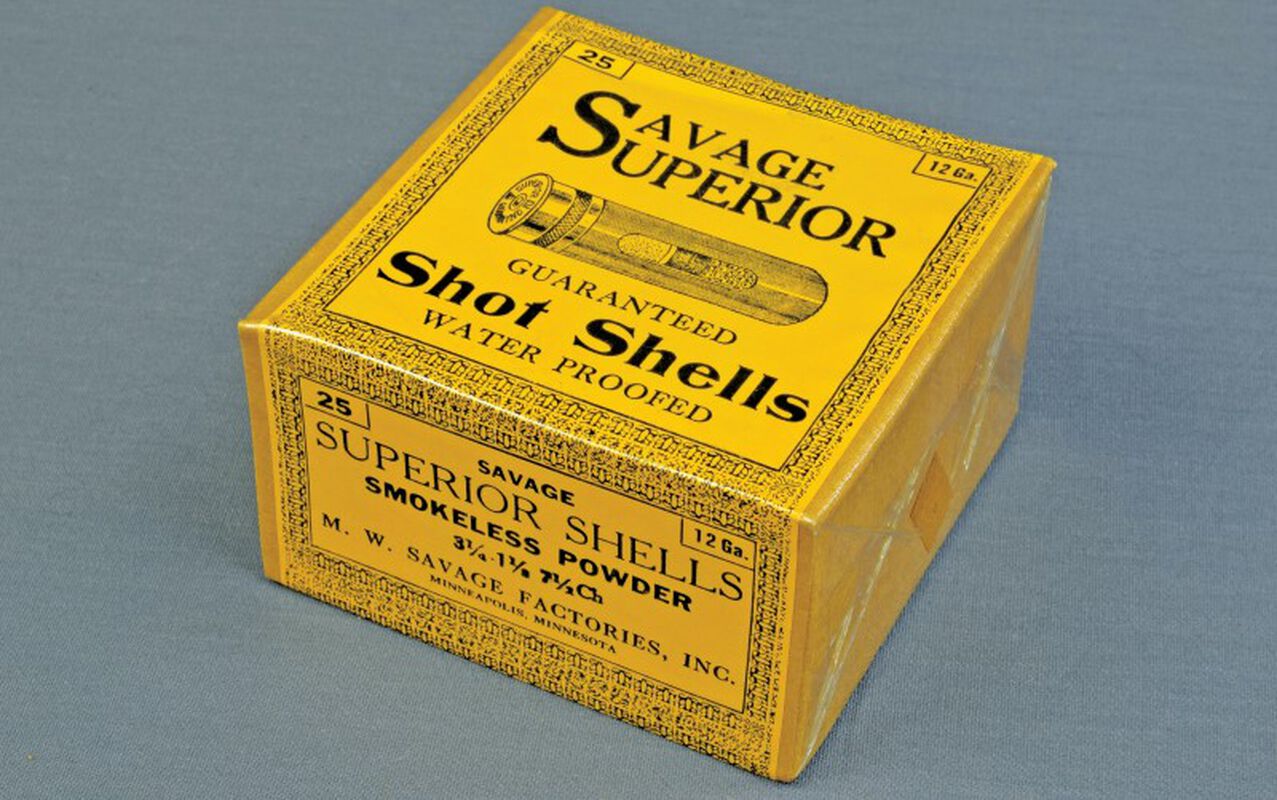 M.W. Savage was a Minneapolis-based catalog house that might today be forgotten except its founder owned the renowned trotting horse Dan Patch. 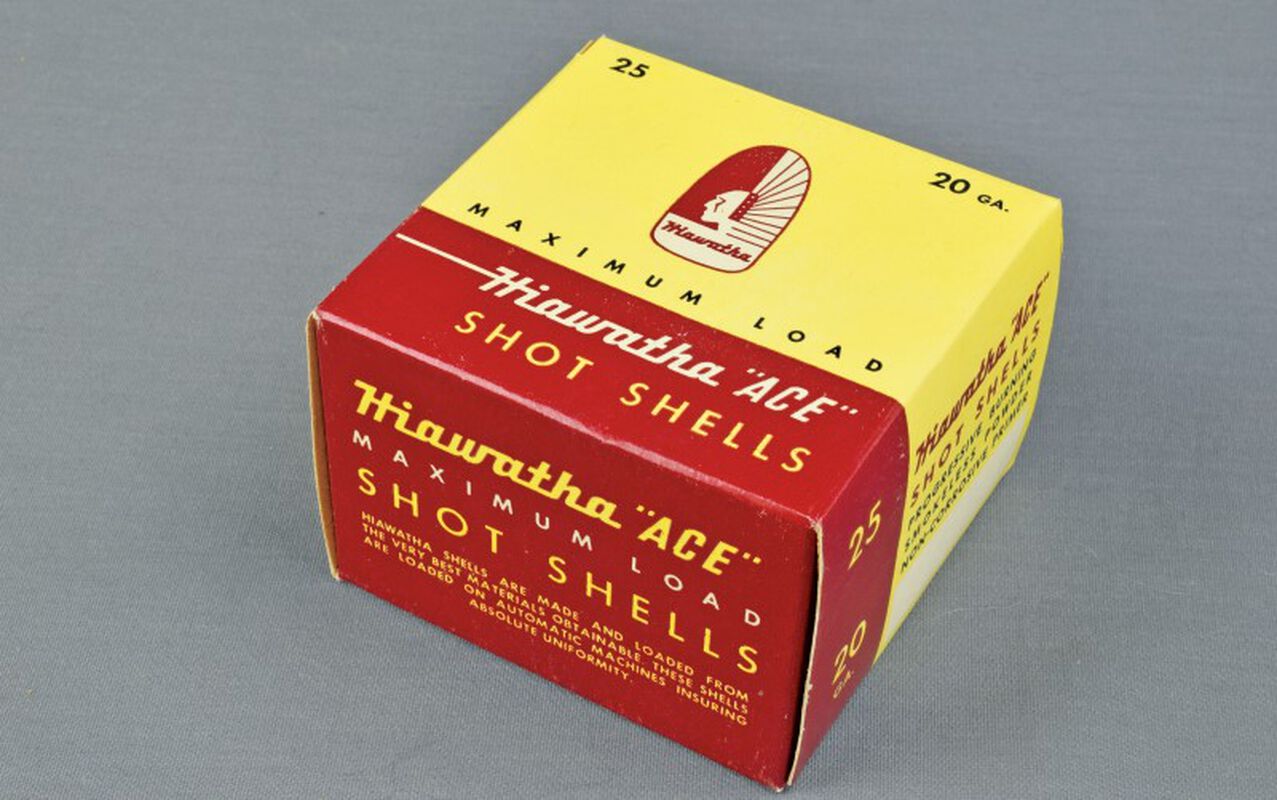 Janney, Semple, and Hill offered Blue Bird standard velocity and, under the Flying Hawk name, “hard-hitting” shotshells. Both were in very plain packaging.

Much more interesting visually are shells from Our Own Hardware: the standard velocity Challenger and the “hard hitting” Diktator.

Consolidation in retailing means the great days of private branding are gone, but Federal has in more recent years loaded ammo for brands like Cabela’s and Herter’s.

Maybe house brands will make a comeback one day, but in the meantime, these now-defunct names are prized by cartridge collectors.