The 1920s: From Bankruptcy To Boom

While the company we know today as Federal Ammunition came into being in 1922, the story begins several years earlier. On September 15, 1916, brothers Harry and Louis Sherman formed the Federal Cartridge and Machine Company. The brothers had experience at Western Cartridge and two companies based in Kansas City, Mo.: the Sportsman Cartridge Company and Brass and Metals Manufacturing Corp.

The brothers ventured north with a wealth of technical knowledge and patents to launch a new company. They secured funding from several businessmen to establish the new ammunition plant on 31 acres of land in Anoka, Minn.

The original factory was a 320x60 foot fireproof building located on the eastern outskirts of the small city. Production of shotshells was to begin inside the factory, while a building in downtown Anoka was dedicated to testing and regulating the new machinery before it was installed in the factory.

The Anoka Union newspaper described the project as a “massive munitions plant” where “all kinds of cartridges will be made.” A few months after construction on the plant was finished, the corporation was reorganized as the Federal Cartridge Co., with plans to manufacture shotshells for foreign and domestic military contracts. The end of World War I upended that plan.

Because of ongoing conflicts with investors, the Sherman brothers left the company in early 1917, and only a small quantity of shotshells were ever made by the factory’s 20 employees before it closed.In the months leading up to the 1920 closure, employees were only called in to produce shells when orders arrived. Though the company had plans to offer 12-, 16-, and 20-gauge shells, only 12-gauge shells are ever known to have been produced before the 1920 factory shutdown.

The Federal Cartridge Company building sat idle for two years, much to the disappointment of Anoka residents who had anxiously awaited the jobs and the economic benefits the ammunition factory would have brought to the city. And that might have been the end of the factory and Federal Ammunition, if not for the intervention of a 34-year-old businessman from Minneapolis named Charles Horn. 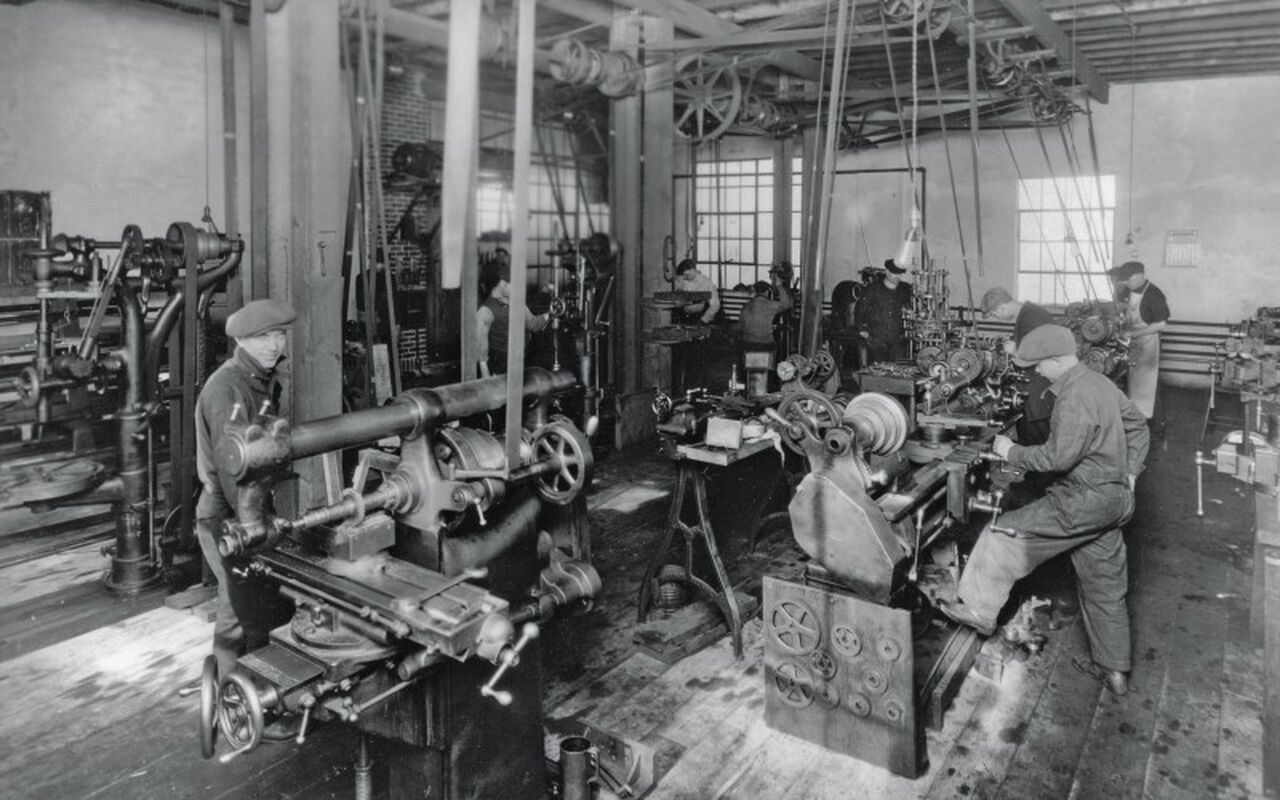 Federal workers of the 1920s had to maintain and sometimes build from scratch the machines required to load ammunition. This required a well-equipped machine shop.

The early shotshell plant was a noisy and somewhat hazardous place with dozens of machines driven by belts radiating from a central jackshaft. You had to keep your wits about you! 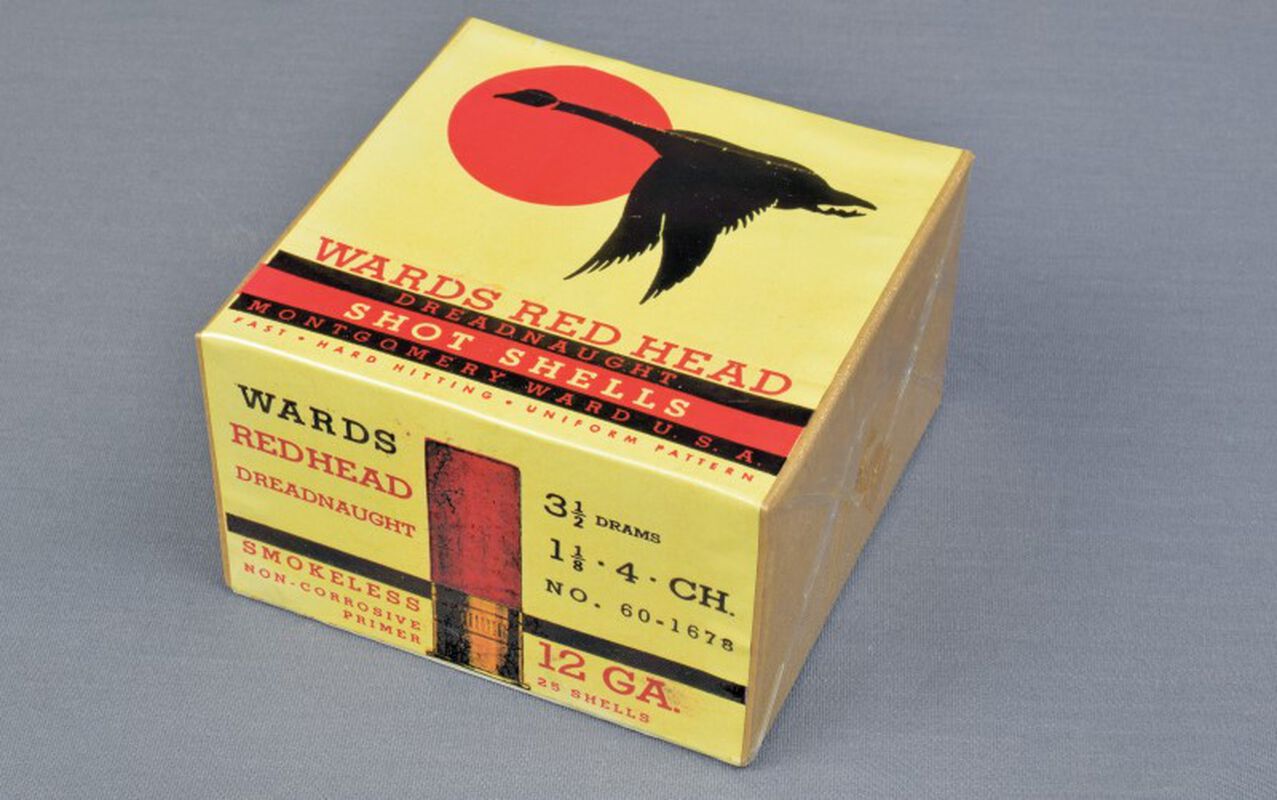 Horn was the president of the American Ball Company, which produced shot and steel balls. In 1922, Horn was seeking a manufacturer to supply paper tubes to hold BBs for air rifles, and that was when he learned about the Federal plant in Anoka.

Initially, Horn was only interested in purchasing the machinery required to produce the paper tubes for BBs. Instead, he was persuaded to bring the plant back to life. Working with T.W. Lewis (the only remaining stockholder), Horn provided the funding to bring the old company out of receivership. This venture proved successful, and on April 27, 1922, Federal Cartridge Corporation was incorporated. Horn and Lewis were the only two stockholders. This was the beginning of the company we know today.

Horn’s first order of business was to hire John Haller, who had been the plant manager prior to Federal’s closure in 1920 (and so Haller became the first employee of the revived Federal). By his own admission, Charles Horn “knew nothing about the ammunition business,” but he was a quick study.

Haller taught Horn the basics of ammunition production, and Haller proved to be an extremely effective plant superintendent. Haller was also a mechanical wizard, driving many innovations and himself building several of the early machines used in shotshell production.

It was an all-hands-on-deck operation, and as the young company ramped up shotshell production, Horn himself worked in the factory to help reduce overhead costs. This “help” resulted in several burned-out machine motors, snapped belts, and ruined shotshell components; his disastrous efforts to help the company, well-intended as they were, became too numerous to ignore.

One of the company’s employees who was charged with repairing the damage from Horn’s mistakes respectfully told Horn that the best way for the company to make money was for Horn to “keep out of the factory as many hours a day as possible.”

Horn accepted the truth in the criticisms levied against him and relocated Federal’s corporate offices to the Foshay Tower in downtown Minneapolis, about 20 miles away from the factory, where it stayed until the mid-1980s. Horn may have failed on the production line, but he proved to be the leader the Federal Cartridge Corporation needed.

While shotshells remained the most lucrative Federal ammunition product in the early years, the volume of rimfire rounds sold was many millions higher. 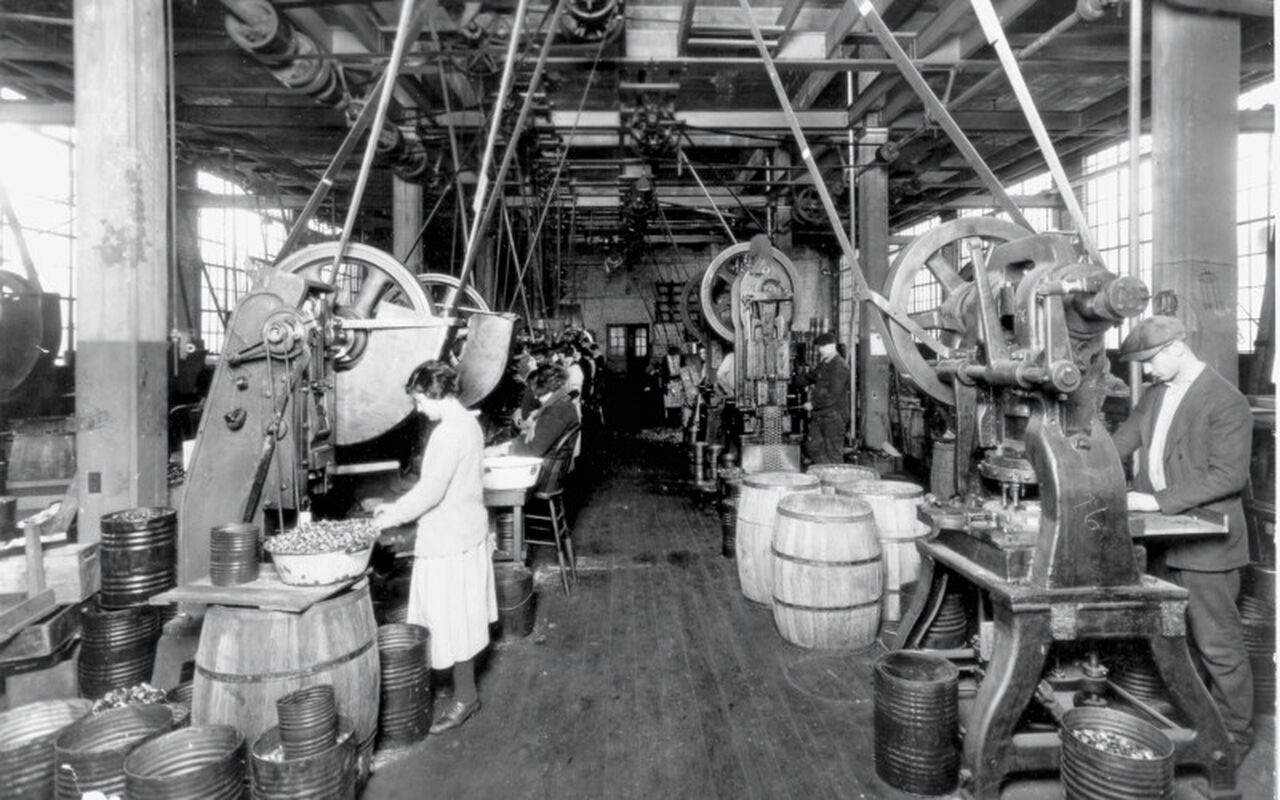 Shotshell production plant at Federal in the 1920s. Throughout the decade, production capabilities increased dramatically, and new products were added. 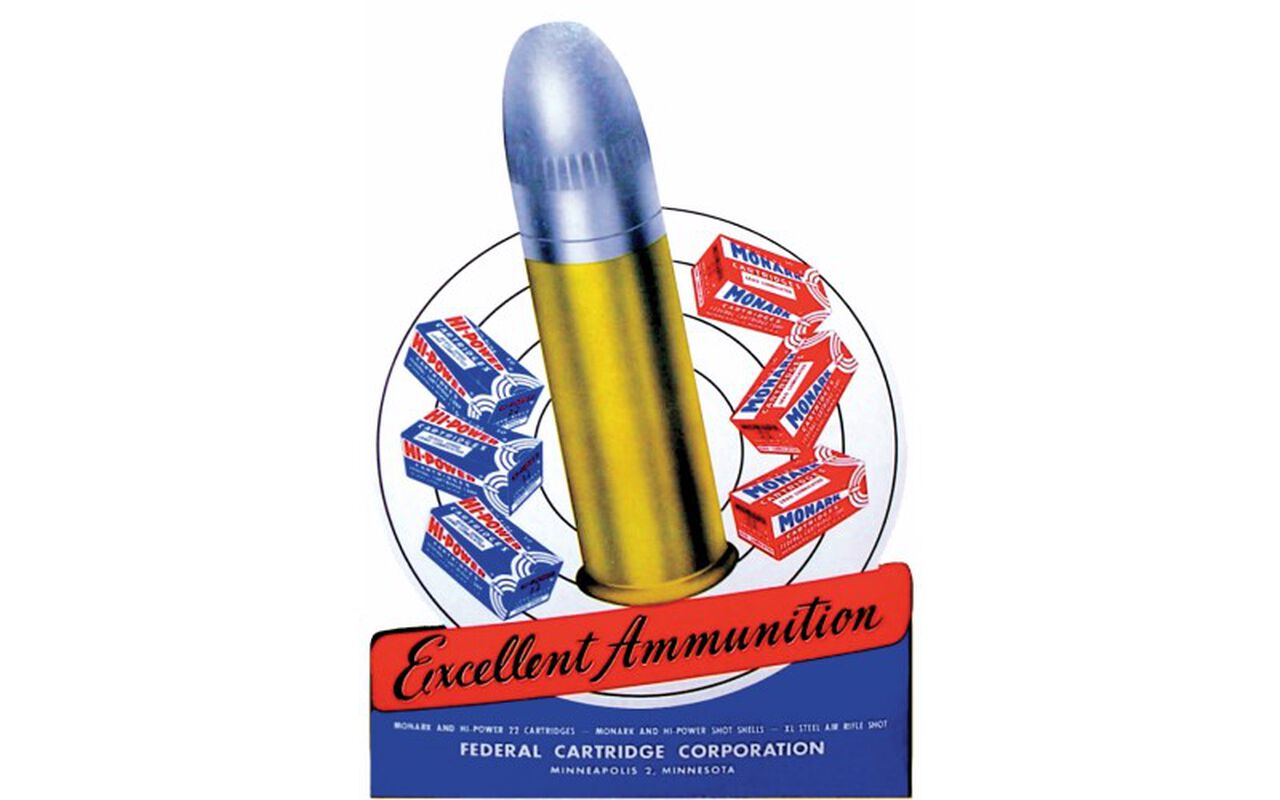 One hurdle that Horn would have to overcome if Federal was to succeed was to develop a new distribution channel through which hunters and shooters could purchase the ammunition it was working so hard to make. Larger competing ammunition companies like Winchester and Remington effectively closed trade channels, and that made it extremely difficult for Federal to secure space on store shelves.

Even after Federal’s Anoka plant was running and producing sizable quantities of ammo, these aggressive tactics by competing manufacturers made it difficult for Federal to turn a profit. Employees in the 1920s described waiting with some anxiety every Friday for Charles Horn to arrive in his red Buick and distribute checks that, although sometimes late, always materialized.

To combat being cut off from traditional trade channels, Horn developed a different distribution plan to get Federal’s Hi-Power shotshells on store shelves. Horn had grown up on a farm in Iowa and spent much of his life in and around small Midwestern towns.

He understood that sportsmen often gather at local businesses — barber shops, pool halls, hardware stores — to swap hunting stories. Horn decided that he would begin selling Federal ammunition in those small local businesses and traveled from state to state to distribute his product. He couldn’t make it to each store personally, so he had a team of secretaries composing letters to business owners. The initial offer was $17 for 500 12-gauge shells, $14 for 500 16-gauge shells, and $13 for 500 20-gauge shells. Horn had great luck selling his shotshells in doctor and dentist offices; patients would come in for a checkup or to have a tooth filled and would leave with an armful of ammunition.

Horn soon picked up another extremely valuable asset by hiring Maurice Swope from Western Cartridge to develop and operate the rimfire plant at Federal Cartridge. In 1924, the company began producing rimfire ammunition.

Swope, called “Daddy” by Federal employees, was a rimfire production genius and a big reason why Federal was considered the leader when it came to making accurate rimfire ammunition by the mid-‘30s.

The debt to Federal was so significant that Horn took over the company and eventually moved it to Anoka. That company would become the American Eagle brand of ammunition that Federal Ammunition still owns today.

A big new sign on the front proudly indicated the ammo plant was back in business after Charles Horn acquired the company. Years of hard work and steady growth were ahead. 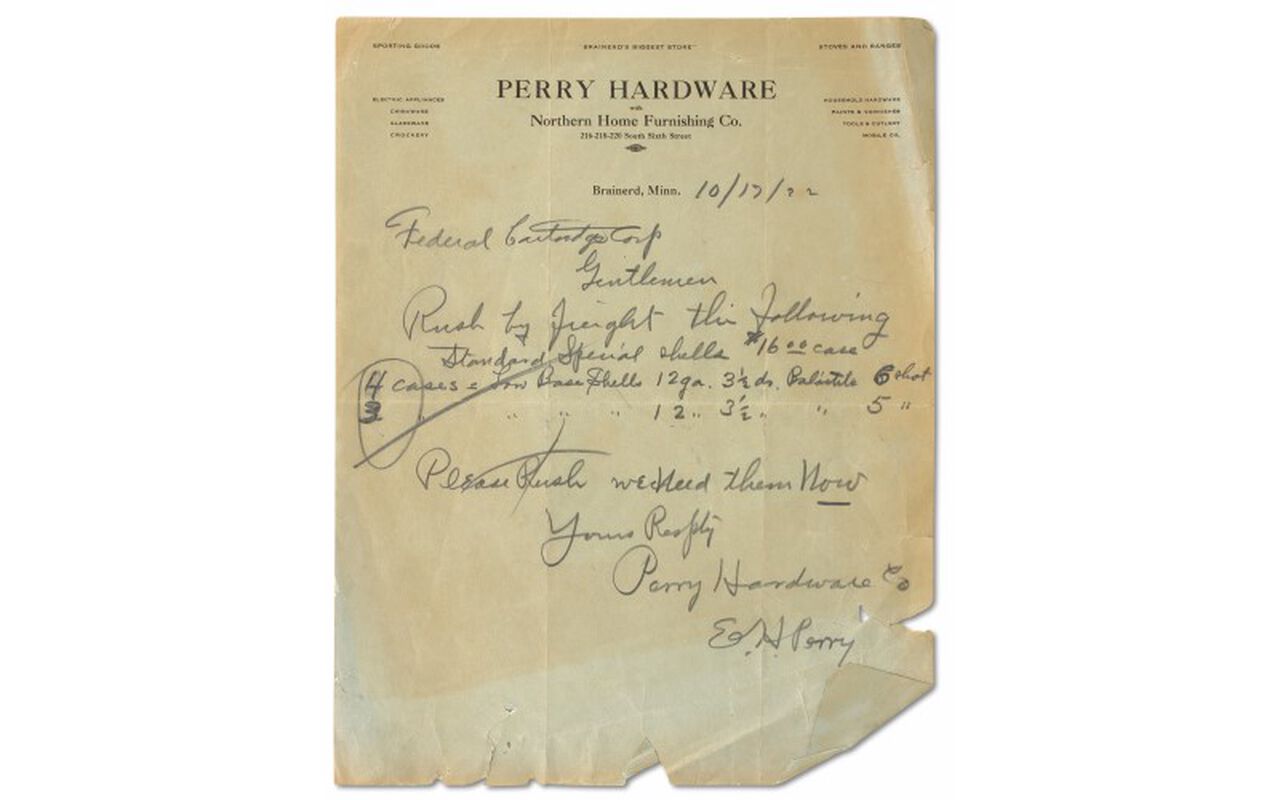 Letters that went out in August 1922 were paying off by October. Perry Hardware of Brainerd, Minn., pleaded with Federal to rush seven cases of 12 gauge. 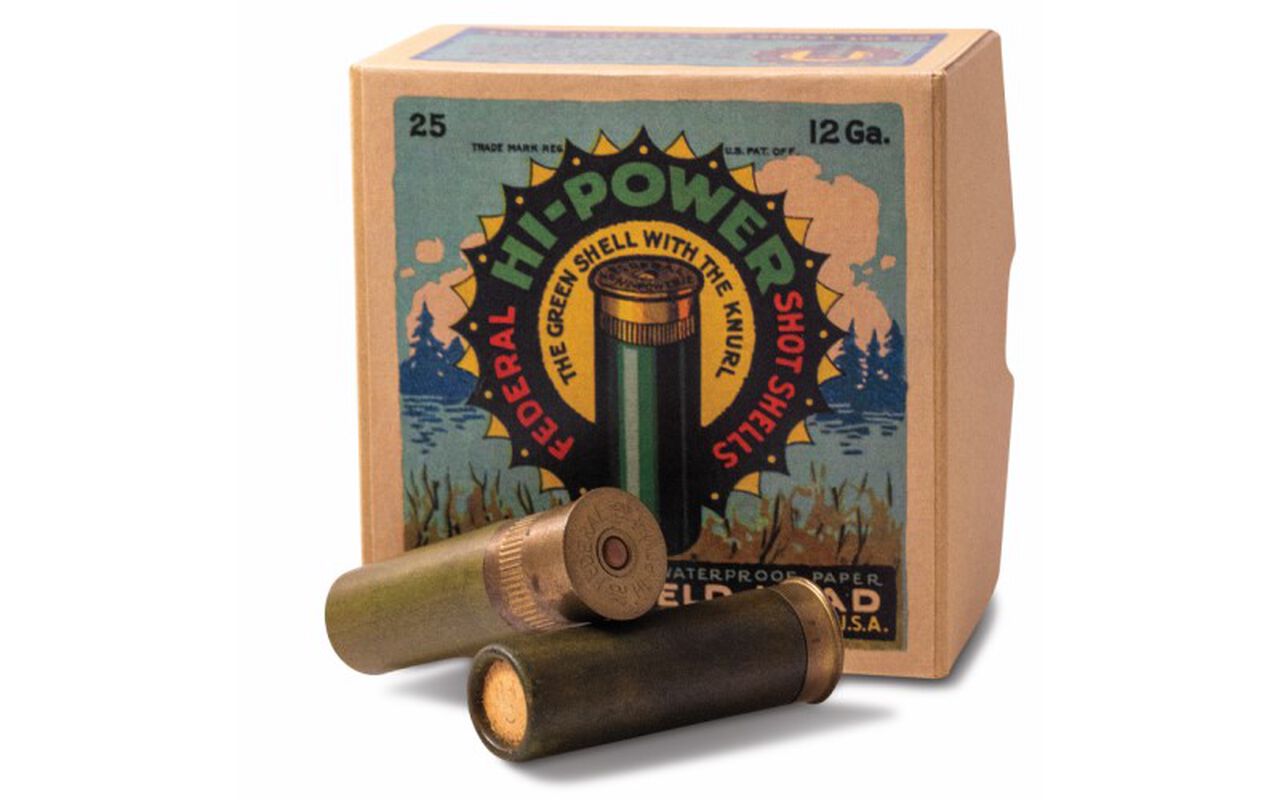 The original Hi-Power shell was green, roll-crimped, and with a vertical knurl on the head. It was packed in a two-piece box with art on the top and two sides.

In the 1920s, Federal began producing “house brand” shotshells and rimfire ammunition for direct retailers. In 1923, they started producing Montgomery Ward's Red Head shotshells. They also manufactured Sears & Roebuck brand ammunition from 1927 to 1971 for both shotshells and rimfire, including their Mallard, Pointer, and Xtra-Range loads. Others included Gamble’s from 1929 to 1979 in shotshell and rimfire and M.W. Savage & Company from 1922 to 1930 for shotshells only. Many hunters and shooters did not know that these house brands (and many others throughout the 20th century) were Federal loads with alternate packaging.

Federal’s own Hi-Power shotshells and rimfire ammunition were gaining favor with hunters and shooters across the country. In 1926, the company introduced Federal Favorite shotshells in 12-, 16-, and 20-gauge and .410 (brass). Shot sizes ranged from BB to No. 8. Additional house brands were added such as Cussins & Fearns Co. in Ohio as well as Janney, Semple & Hill, and Our Own Hardware Stores in Minneapolis.